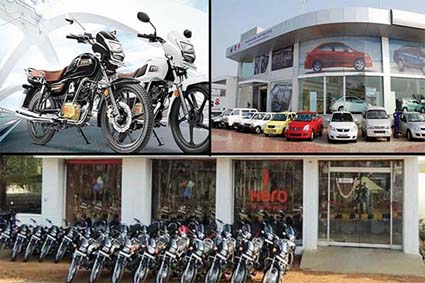 The ongoing festival season brought further cheer to the automobile industry with most PV manufacturers reporting healthy sales numbers in October while Maruti Suzuki posting a double-digit growth for the fourth month in a row. In the two-wheeler segment, Bajaj Auto witnessed its highest-ever monthly sales. Commercial vehicles, however, displayed a mixed bag during the month.

The country’s biggest carmaker Maruti Suzuki India Ltd saw an uptick of 18.9 per cent in its total sales (domestic + exports) at 1,82,448 units.   The company’s sales of mini cars, comprising Alto and S-Presso, declined marginally to 28,462 units as compared to the same month last year. However, sales of compact cars like WagonR, Swift, Celerio, Ignis, Baleno and Dzire increased by 26.6 pc to 95,067 units. The sale of utility vehicles also rose 9.9 per cent to 25,396 units as compared with 23,108 units in the year-ago month.

Toyota Kirloskar Motor announced that the company sold a total of 12,373 units in October, which is an increase of 4.3 pc over 11,866 units sold in the corresponding period of the last financial year. Commenting on the performance, Mr Naveen Soni, Sr. Vice-President, Sales & Service, TKM, said, “The month of October has been our best month so far since March 2020. The festive season has proved to be bullish as we witness demand surging, month on month. This has been true of our retails too as order flow has been smooth, from the very beginning.”

Honda Cars India reported an 8.3 per cent increase in domestic sales to 10,836 units. The company had sold 10,010 units in the domestic market in October 2019. Exports stood at 84 units last month. “We have seen positive sales momentum in line with market sentiment and our October results have been as per our plan,” said Mr Rajesh Goel, Senior V-P and Director (Marketing & Sales), Honda Cars India Ltd.

Tata Motors reports sales data quarterly. However, it retailed 10,887 units during the Navratri period this year, an increase of 90 pc over 5,725 units last year.

MG Motor India saw its monthly sales rise 6 per cent in October to 3,750 units. The carmaker sold a record 3,625 units of its flagship Hector during the month while its latest offering Gloster has seen over 2,000 bookings.

In the two-wheeler segment, largest seller Hero MotoCorp, recorded total sales of 8,06,848 units, which it claims to be the highest-ever sales in any single month. Bajaj Auto’s two-wheeler sales rose 18 pc in October to 4,70,290 units from a year ago. This is its highest ever sales recorded in a month, according to the company’s regulatory filing. TVS Motor Company’s sales grew by 22 pc year-on-year, registering 3,94,724 units in October. Eicher Motors Ltd., the maker of Royal Enfield motorcycles, saw its sales decline 7 per cent to 66,891 units.

Unlike passenger vehicles and two-wheelers, rebound in the CV segment is happening at a slower pace. Due to various factors, LCVs are making better sales than heavy & medium commercial vehicles. At 9,989 Units Hinduja Group’s flagship firm Ashok Leyland reported 1 per cent increase in total commercial vehicle sales in October. It had sold 9,862 units in the same month last year.

Tractor major Sonalika Group registered deliveries of 19,000 tractors and sold 10,018 rotavators in October, making it the highest-ever retail across the country, according to the company. It also clocked the highest-ever production at 15,218 tractors in a month.