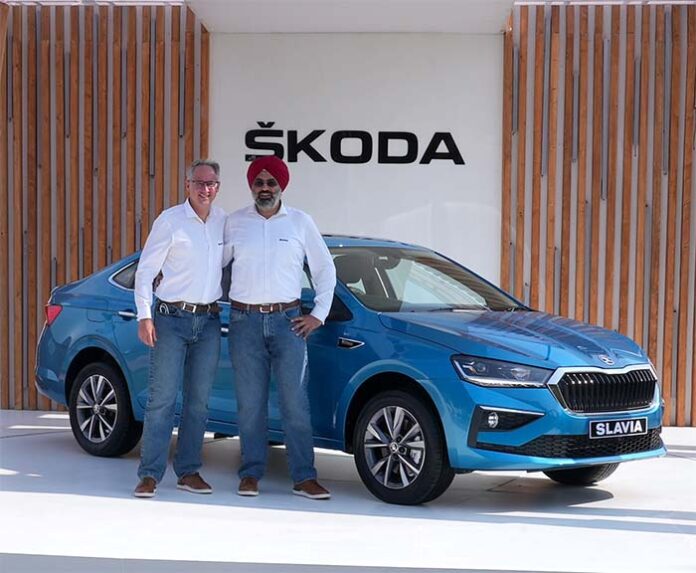 Skoda Auto launched its midsize sedan Slavia on November 18, marking the start of the next stage in its India 2.0 project. Following Kushaq, Slavia is the Czech carmaker’s second India-specific model.

The new sedan has been launched in five colour options and in three trims, Active, Ambition and Style.

According to the company, Slavia is based on the locally developed and produced MQB‑A0-IN platform, designed to meet new, stricter safety and emissions specifications.

Mr. Thomas Schäfer, CEO, Skoda Auto, said, “With the new Slavia, we are igniting the next stage of our India 2.0 product campaign. Following the successful launch of the Kushaq, we are now entering another popular segment with our brand-new premium midsize sedan.”

Slavia, he said, was perfectly tailored to the needs of customers in India and is built with up to 95 per cent localisation. “We are confident that both the Kushaq and the Slavia will allow us to leverage the full potential in this promising, growing market,” he added.

Mr. Gurpratap Boparai, Managing Director of Skoda Auto Volkswagen India, said, “The sophisticated Slavia stands for prestige and style. It also represents a new growth area for Skoda Auto. With its sophistication, capable engines and numerous simply clever features, the Slavia will appeal to discerning customers in India, and it will also be appreciated in markets around the world.”

Skoda Slavia comes in two engine formats 1.0 TSI and 1.5TSI with six air bags. The one litre three-cylinder petrol engine generates 113 bhp of power and 175 Nm of torque. It comes available with a six-speed manual and a six-speed automatic gearbox options.

The larger 1.5-litre four-cylinder turbocharged engine gets 150 bhp of power and 250 Nm of torque. It comes available with a six-speed manual and a seven-speed DSG automatic gearbox options.

According to a company press release, Slavia’s interior is based on the latest design concept of Skoda’s European models. A free-standing infotainment screen measuring up to 25.4 centimetres takes the centre stage. The circular air vents are another striking feature.

The car’s low front section highlights a hexagonal Skoda grille, extending all the way to slender, sharply defined headlights that feature an L-shaped daytime running light strip. Also visible are the coupé-style silhouette and long wheelbase, as well as a distinctive badge with the Skoda wordmark on the front wings.

The sedan’s roofline slopes towards the rear, where it merges into the boot lid. Adding further touches to the model’s distinctive looks are the Skoda word-mark in block letters and a rear apron with a chrome strip. Reflectors on either side emphasise the vehicle’s width. Featuring the signature C-shaped Skoda lights design, the taillights are divided into two parts and extend into the boot lid.

The sedan, said the release, comes with excellent active and passive safety features. Occupants are protected by up to six airbags. To ensure children also have a safe journey, Slavia comes with ISOFIX anchors and Top Tether anchor points on the rear seats. ESC is another standard feature ensuring a high level of driving safety.