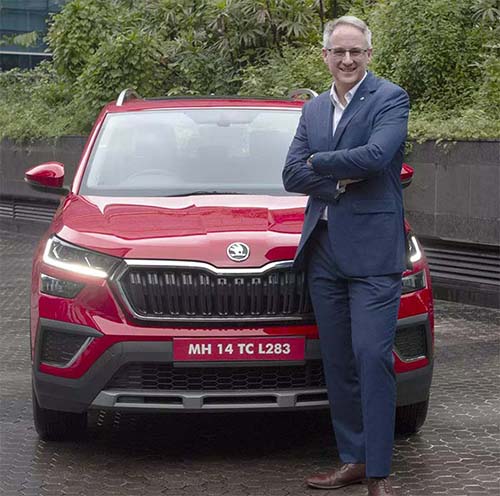 This is probably the most ambitious and fastest growth the carmaker has set for India on the strength of six new launches in the country. The company sees this as an important step to put it on track to achieve sales volumes of 1,00,000 units by 2025 and make India one of the top 10 markets for Skoda Auto.

The first product to be launched will be a mid-size sedan Slavia. Built on the same MQB A0 IN platform as the KUSHAQ. It will replace the Skoda Rapid and compete with the likes of Verna, Ciaz, Honda City, etc. “Slavia will be available at the dealership by February and launch will happen in March,” Zac Hollis, Brand Director, ŠKODA AUTO India said.

Justifying the entry with the mid-size sedan, Hollis said, “The slowing sales in sedan may not be because of lack of demand but because manufacturers have been focusing on SUVs and there were not many new launches in the segment. We will bring the focus back to Sedans.” Skoda Auto has also tasted a bit of success with the launch of the first leg of the India 2.0 project with compact SUV Kushaq. A project that involved the development of the MQB A0 IN platform made specifically for India, that formed the base for the launch of the KUSHAQ. Since its launch in March this year the carmaker has sold 13000 units of Kushaq. Going forward it has lined up another premium SUV Kodiaq for the Indian market. Kodiaq will be launched in January in a 7-seater Avatar.