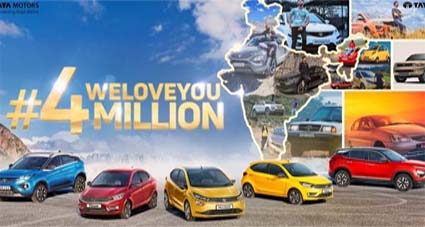 Narrated with a voiceover by prominent actor Anupam Kher, the video highlights the company’s journey towards Atmanirbharta – one car at a time.

This film draws a visual timeline with Kher narrating the key milestones achieved by the company since its establishment in 1945. From reliving some of India’s iconic historic moments to keeping up with the changing times, the video captures it all and concludes with the launch of the New Forever BS-VI range of cars – Tiago, Tigor, Nexon, Harrier and  Altroz,.

Mr. Vivek Srivatsa, Head Marketing, Passenger Vehicle Business Unit (PVBU), Tata Motors, said, “As one of India’s foremost home-grown automotive brands, we are delighted to have reached this significant milestone for our passenger vehicles segment. We are honoured to have the legendary Mr. Anupam Kher as the narrator of the glorious journey of a brand that is a legend in itself. This film is a testament to not only our evolutionary growth over the last 30 years but also the growth that India has seen as a nation through this period.”