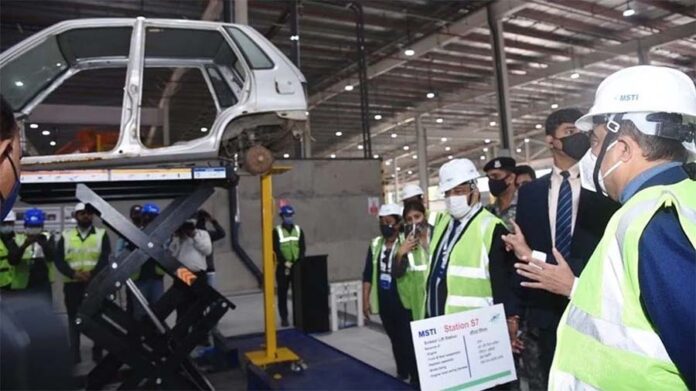 The scrappage plant, built with an investment of ₹44 crore, is in accordance with the Centre’s Vehicle Scrappage Policy.

The facility will have the capacity to scrap 2,000 vehicles every month and will take a bit more than three hours to scrap one vehicle.

Addressing the event, Gadkari said, “The scrappage policy will be one of the key factors to control pollution. Old cars are much more polluting than new ones, so they need to be phased out. We expect sales to grow 10-12 % due to scrappage policy.”

“Old vehicles cause pollution that’s a big problem for society. Scrapping is very important for the economy. We will get all raw materials at lower cost by which we can lower production cost,” he added.

Gadkari also said that the Centre is planning to introduce at least a few such vehicle recycling or scrapping centres in every district in the country. The minister said that such a move will not only ease the process of scrapping old cars but will also create more employment, boost economy, and help reduce vehicular pollution.

“The auto sector has an annual turnover of Rs. 7.5 lakh crore. Target is to take it to Rs. 15 lakh crore in 5 years. India aims to have net-zero emissions by 2070 & it’s very important for us. I’m confident that scrappage policy is one of the solutions,” said Gadkari.

He also revealed that the government is considering a proposal to provide more tax-related concessions on vehicles that are purchased after scrapping old vehicles. “The GST revenue of both the Centre and states will rise due to the scrappage policy. I will discuss with the finance ministry on how to provide more (tax-related) concessions under the new vehicle scrappage policy,” he added.

Prime Minister Narendra Modi had launched the National Automobile Scrappage Policy in August this year. The national vehicle scrappage policy will come into effect from April next year. The vehicle scrappage policy rules, which are likely to be called the Central Motor Vehicles (23rd Amendment) Rules, 2021, will come into effect from April 1, 2022.

According to the voluntary vehicle scrapping policy, which aims to phase out old and unfit vehicles, will make it mandatory for personal vehicles to undergo fitness test in automated centres after 20 years while the commercial vehicles will undergo the test after 15 years.

The policy has put a cap of 20 years for private vehicles and 15 years for commercial vehicles to go through an automated fitness test. If owners decide to scrap such old vehicles, it will offer a 5 per cent incentive on purchase of a new vehicle.

Vehicles that do not meet the set standards will not be registered with the Regional Transport Office (RTO). Owners of vehicles that are more than 15 years old will have to pay eight times more to renew registration. The policy has fixed ₹5,000 as the renewal fee for cars older than 15 years. Similarly, the fee to renew registration of 15-year old bikes would cost ₹1,000 compared to the current fee of ₹300. For imported bikes and cars, the renewal of registration will be more costly. It has been pegged at ₹10,000 and ₹40,000, respectively.

The renewal of certificate of fitness for public and commercial vehicles, like bus or truck, older than 15 years will also cost eight times more than it is currently. The renewal fee may range between ₹10,000 and ₹12,500.