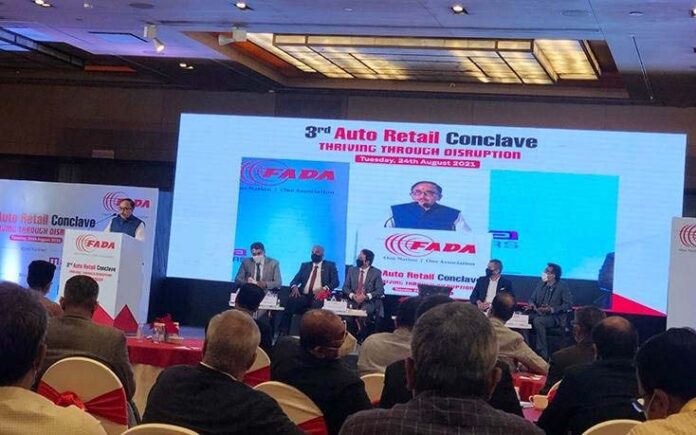 The Federation of Automobile Dealers Associations (FADA) hosted the third edition of its Auto Retail Conclave on August 24 with the theme, ‘Thriving Through Disruption’.

Participants at the conclave included Indian and global auto-making companies, industry stalwarts and FADA members from across the nation.

Speaking on the occasion, Dr. Pandey acknowledged the significant contribution made by the dealers’ community to the auto industry and the economy and said it should play a vital role in making India a manufacturing hub under the visionary leadership of Prime Minister Mr. Narendra Modiji.

He urged the industry to continue making efforts to make India an atmanirbhar manufacturing hub not only for India but globally and to contribute to the success of the Government’s Automotive Mission Plan 2026.

FADA President, Mr. Vinkesh Gulati, said, “The COVID-19 pandemic has had a marked impact on automobile dealers. Many dealerships are family-owned small, mid-sized businesses and partnership firms. The resilient industry has survived the pandemic by managing finances prudently and restructuring the overall dealer business.”

However, he said the pandemic and the exit of several prominent auto OEMS has hurt the dealers extensively. “While the Government has done a lot to promote the viability of the sector, we request it to consider protecting the auto dealers’ rights who have been impacted by the unexpected exit of MNCs with whom they had signed up as long-term partners. Giving industry status will create a sense of equilibrium in this industry”, he said.

The conclave witnessed a series of panel discussions on optimisation, reinforcement and agility of the dealerships. The key topics for the discussions were ‘Strengthening our Relationship’ and ‘Future of Auto Retail’.

An awards ceremony was also held to honour the winners of FADA’s Dealer Satisfaction Study – 2021. The survey was conducted by FADA in collaboration with PremonAsia, a consumer-insight driven consulting and advisory firm based in Singapore.