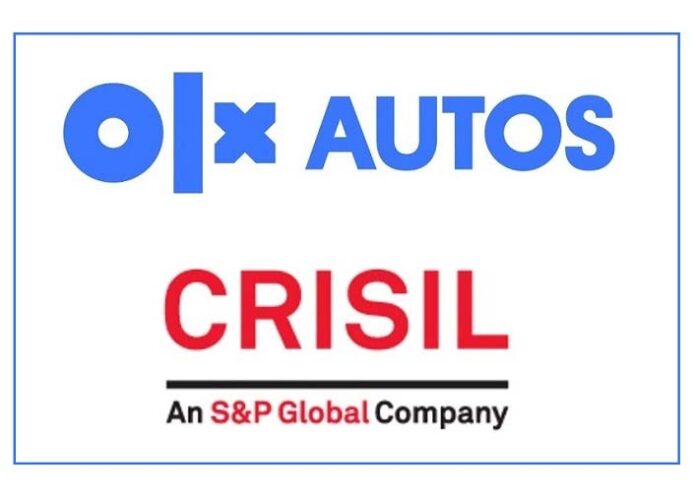 OLX Autos announced the findings of the fifth edition of its study on pre-owned car market, conducted in association with rating agency Crisil. It estimates the size of the pre-owned car market in the country and examines key trends and attitudes towards the sector.

A comprehensive report on India’s pre-owned car industry, the study combines OLX Autos’ vast and extensive data, along with Crisil’s edge in research and insights to arrive at decisive trends that are shaping the sector, said a press release.

According to the study, the pre-owned market has been outpacing the new car market, and the industry is expected to clock a healthy growth rate of 15 per cent in FY22. It said the prospects continue to be bright on the longer horizon, with a 12-14 pc CAGR expected over the next few years, taking the size of the market to more than seven million vehicles by FY26, from 3.8 million units in FY21.

In addition, the accelerating trend of digitalisation will lead to an increasing share of sales through digital classifieds, which will move to 25 pc from 15 pc currently. The share of organised players in the pre-owned market, including digital platform sales, will also see a 10 per cent increase, from 20 pc currently to 30 pc in five years.

Mr Amit Kumar, CEO, OLX Autos India, said, “The study brings in breakthrough insights into the pre-owned car segment. The preference for personal mobility has propelled a huge swing in favour of used-car sales that are expected to reach a phenomenal 1.5x more than that of new car sales over the next five years. The digital switch has been highly transformative, bringing in its wake increased transparency, trust and a huge choice of new-generation vehicles to the consumer.”

–The pandemic, digitalisation, changing demographics and aspirations, first-time buyers, and availability of financing options are driving sustained growth in the pre-owned car segment.

–Digital platforms are gaining traction due to their wide reach, accessibility and ability to provide a variety of options.

–Apart from the digital push, the market has received a boost from first-time buyers who account for nearly half of all pre-owned cars sold in India.

–The outbreak of COVID-19 and the subsequent shutdowns have affected the market in both ways. While in the first half of 2020, the sales were impacted by lockdowns, the market witnessed huge growth in the latter part of the year.

–During the first wave of the pandemic, supply crunch and increased demand impacted stock levels across regions, mainly in the South and West where inventory levels came down to 30-35 days.

–Compared to pre-COVID levels, the demand shot up 20-30 pc after the unlocking in CY2020. Demand improvement was more pronounced in the South, followed by the West.

Global auto executives are confident that the auto industry will see more profitable growth in the next five years and that the market share...
Read more
Industry Speaks

Indian businesses must create a clear customer proposition and differentiation rather than only competing on cost, Goenka opined. "You have to define what will...
Read more
Industry Speaks

The Federation of Automobile Dealers Associations (FADA) on October 27 released a Policy Brief for the introduction of an auto dealers’ protection Act in...
Read more
Industry Speaks

Experts from EV industry emphasised that the need for indigenous EV manufacturing supply chain is being felt stronger than before. They were speaking at a...
Read more
Industry Speaks

The mobility industry has experienced huge disruptions due to the pandemic, impacting development trends in mobility and transportation. A recent report by YouGov highlights...
Read more
- Advertisment -