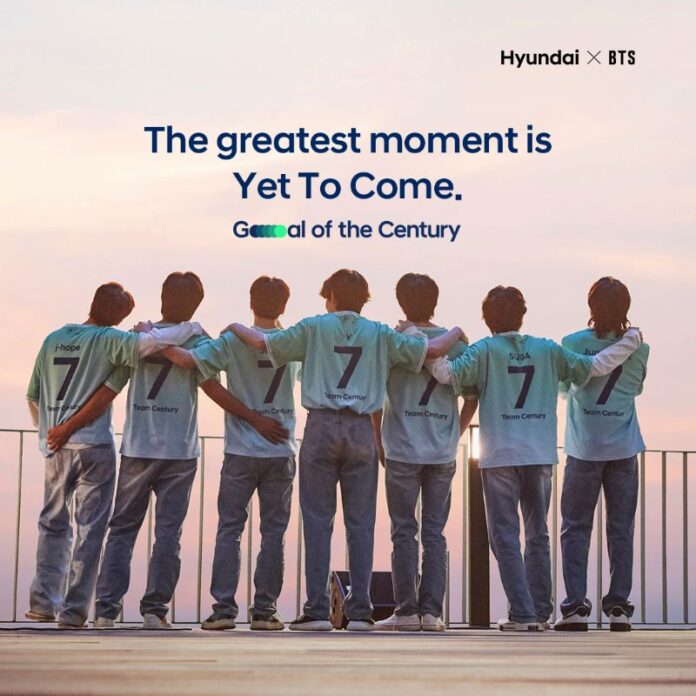 Hyundai Motor Company announced that it will release “Yet To Come” with BTS for the ‘Goal of the Century (GOTC)’ World Cup campaign song. The song released through streaming platforms such as Spotify and Apple Music, along with a full music video on Hyundai’s official YouTube Channel.

“Yet To Come (Hyundai Ver.)” is a British rock remix version of BTS’ “Yet To Come (The Most Beautiful Moment),” which emphasizes the climax to deliver the cheering message for ‘Goal of the Century’ and anticipation toward the World Cup.

“As one of the most influential global artists in the world, BTS and their music greatly influence our society to develop in a positive direction. Through the World Cup campaign with BTS, we hope to create an opportunity for people all over the world to unite towards one goal of sustainability and cheer each other up,” said Jaehoon Chang, President and CEO of Hyundai Motor Company.

The campaign song utilized the original lyrics and added lines such as “Now the vision is clear, the Goal of the Century is here”. Plus, the song is also filled with lyrics such as “I know, together, we’ll make it better” and “We’re gonna run till a new tomorrow” in hopes to create a better future together.