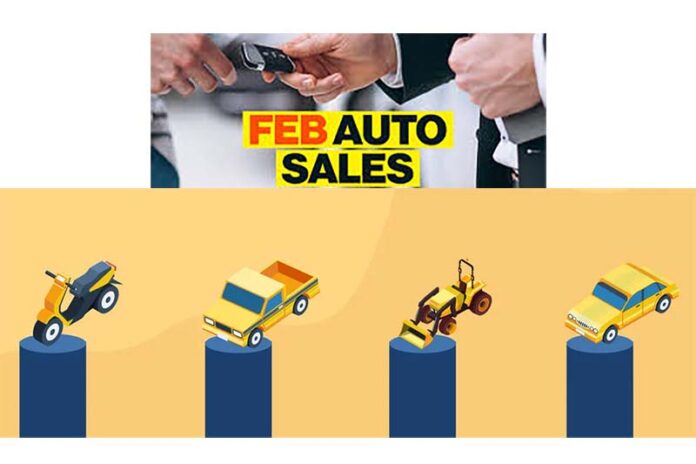 Domestic sales of vehicles in February do not indicate an overall positive trend. Most of the OEMs have reported fall in sales, for some it is a mixed bag. Chip shortage and supply chain constraints have improved. They are expected to become better.

However, the passenger vehicle OEMs have a lot of catching up to do. The commercial vehicle segment has been looking up. The stagnant demand for two wheelers is a major concern. Tractor sales are expected to gain momentum. The following is a segment-wise report of the vehicle sales in February 2022.

Passenger vehicles: With the improvement in chip supplies, car production improved and wholesale dispatches also increased. However, the overall performance of this segment was impacted by the decline in the sales of market leaders Maruti Suzuki and Hyundai Motor compared to the sales in February 2021.

The shortage of electronic components had a minor impact on the production of vehicles sold in the domestic market. According to the company, it took all possible measures to minimize the impact.

Hyundai, which reported a drop of 15% in YoY sales, said that as the industry continues to grapple with the semiconductor shortage, it is exploring alternatives to ensure that customers can take delivery of their cars at the earliest.

He said the company expects strong demand to continue as the Covid situation eases further. It is closely monitoring the semiconductor related parts supply to take corrective action as appropriate.

Kia India, which is one of the top five carmakers, said that Seltos remained the top contributor to its overall sales with 6,575 units, while Sonet and Carnival contributed 6,154 and 283 units, respectively. The recently launched Carens dispatches stood at 5,109 units.

The carmaker has recently started the third shift in India and is targeting to produce over 3 lakh units in the calendar year. “We are hopeful for some improvement in the supply chain constraints from Q2 onwards,” said Yung-Sik Sohn, Chief Sales Officer, Kia India.

Atul Sood, Associate Vice President (Sales and Strategic Marketing), Toyota Kirloskar Motor also said that the overall sentiment in the market remains positive. “This has also led to a consistent rise in order bookings, especially for the Innova Crysta as well as the Fortuner and as a next step, we are looking forward to catering to the pending orders on our side.”

Skoda Auto India, which recently launched the Slavia sedan and has been betting on the mid-size sedan segment, reported over five-fold surge in sales to 4,503 units last month. However, the carmaker said, “The sales in February 2022 were driven primarily by Kushaq SUV.”

Two-wheelers: Even though the two-wheeler wholesales have improved on a month-on-month basis, they remain in red against the corresponding month last year. The top three two- wheeler makers reported a drop in domestic sales, owing to the subdued demand from the rural sector. Hero MotoCorp motorcycle sales declined by 27% to 3,38,454 units and scooter sales dipped by 52.5% to 19,800 units in February 2022.

Meanwhile, its largest competitor Honda Motorcycle & Scooter India (HMSI) saw a decline of about 1.25 lakh units in February 2022 as against the same month last year.

The niche bike maker Royal Enfield, a unit of Eicher Motors, also said that the supply chain constraints due to the shortage of semiconductor chips continued to persist during the month and the company is working with its supplier ecosystem to resolve the same.

Commercial vehicles: Being a direct reflector of the state of economy, this segment is slowly coming into pace with the improvement in freight utilization and all the OEMs have reported their wholesales in green. Being the segment leader, Tata Motors reported sales of 10,233 units of M&HCV, 5,599 units of I&LCV, 1,759 units of passenger carriers and 16,303 units of SCV cargo and pickups.

VE Commercial Vehicles (VECV), a joint venture between Volvo Group and Eicher Motors said total domestic sales of Eicher-branded commercial vehicles (CV) last month stood at 5,093 units, as against 4,825 units in the year-ago month, a growth of 5.6%. Sales of Volvo branded CVs were at 111 units, as compared to 122 units in the same month last year, a dip of 9%.

Tractors: The year-on-year tractor sales declined due to the high base of last year. However, the underlying demand drivers remain intact.

With record expansion in sown area for the third consecutive Rabi season, we are optimistic for an all-time high crop production level.” “Additionally, the Governments focus on increasing the intensity of summer crops will bring in additional income in the hands of the farmers. In the exports market, we have sold 1527 tractors, a growth of 56% over last year,” he said.

According to Escorts, the tractor industry wholesales continued to remain subdued in February 2022, due to high base of last year, steep price increases due to higher inflation in commodity prices impacting retails and above normal inventory levels with the channel.