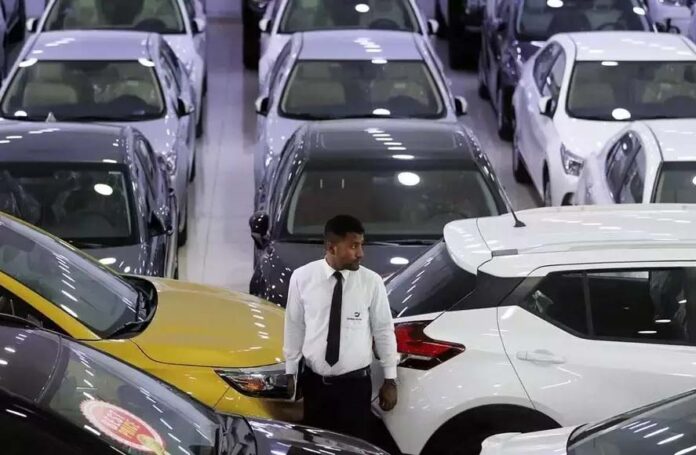 A total of 3,20,487 passenger cars were sold in March this year compared to 1,43,014 in the corresponding month last year showing an increase of 128 per cent. The whopping growth was primarily due to the low base of March 2020 because of the lockdown that was imposed towards the end of the month.

Sequentially, too, the PV sales went up by 3.9 per cent over 308,593 units sold in February 2021. For the entire financial year, however, the wholesale volumes declined by around 2-3 pc at 2.71 million units.

Home-grown major Tata Motors continued its dream run and grew at phenomenal 422.5 pc YoY with sales of 29,654 units in March. The company posted its highest ever volumes in eight years to reclaim the third spot in the local passenger vehicle market with sales of 2,22,025 units in FY21. “The PV industry witnessed a strong growth in Q4FY21 on a low base with robust demand for personal mobility and new launches driving demand,” said Mr Shailesh Chandra, President, PVBU, Tata Motors.

The other domestic giant, Mahindra & Mahindra, saw its sales soar five times YoY to 16,700 units last month against 3,383 units a year earlier. The company said it is witnessing good momentum in demand and has a strong pipeline of bookings across its range of SUVs Bolero, Scorpio, XUV300 and Thar.

Toyota Kirloskar Motor reported its highest monthly sales in the domestic market since 2013, at 15,001 units, 114 per cent more than March 2020. “We have been able to sustain the growth momentum as we closed the last quarter registering a 73 pc growth in domestic sales, when compared to the sales in the corresponding period last year (January-March 2020),” said Mr Naveen Soni, Senior V-P, at TKM.

MG Motor India trebled sales to 5,528 units but said the company is likely to see a disruption in the supply chain due to shortage of semiconductor chips globally as well as the second wave of COVID-19. “We may observe a few NPDs (no production days) in April 2021 as a preventive measure,” said Mr Rakesh Sidana, Director (Sales) at MG Motor India.

Honda Cars India, which sold 7,103 units in March, also saw the production of its sedan, City, being affected because of the shortage of semiconductors.

In the two-wheeler segment, Hero MotoCorp reported a 72 pc year-on-year increase in sales at 544,340 units in March. Sales in the fiscal year ended March dipped 10 pc at 5.6 million units.

Among CV makers, Tata Motors witnessed a six-fold increase in sales of CVs at 36,995 units in March. Chennai-based Ashok Leyland saw its commercial vehicle sales go up to 15,761 units, compared to 1,734 units sold in the year-ago period. VE Commercial Vehicles’ sales grew to 6,221 units from 1,432 units in March 2020.