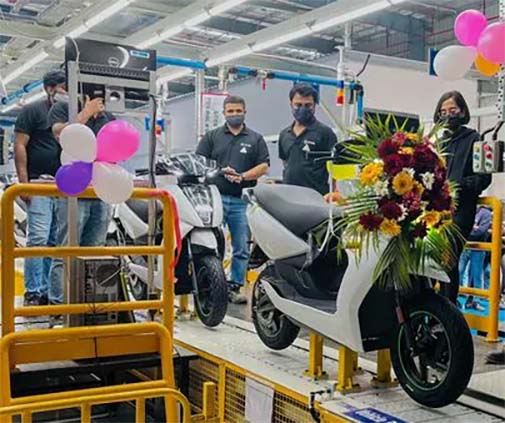 Ather Energy announced that it has rolled out the 25,000th 450X e-scooter from its Hosur manufacturing facility. Ather has achieved this milestone in 2 years, between 28th January 2020 to 4th March 2022. The manufacturer shared images of Ather 450X rolling off the assembly line on its social media handles.

The Ather 450X is among the prominent e-scooters in the Indian market where different EV manufacturers have already launched their products. The e-scooter gets a sharp visual appearance and a host of features. In terms of engine, the Ather 450X is powered by a 2.9 kWh lithium-ion battery coupled with an electric mill to generate 8 hp power and 26 Nm torque.

The new Ather 450 X’s power and torque is higher than the old Ather model. Ather 450X is available with four riding modes – Eco, Ride, Sport and Warp. The new Warp mode offers a peak torque of 26 Nm. Ather claims that the 450X e-scooter has a range of 85 km/charge on Eco mode, 50 km/charge on Warp mode and 75 km/charge on Ride mode.

The e-scooter goes from 0-40 kmph in barely 3.3 seconds and 0-60 kmph in 6.5 seconds, the company claims. Ather Energy is planning to increase the production of its 450X electric scooter. The company aims to amplify the 450X production to 4,00,000 and eventually to around 1 million units yearly in the next three years.