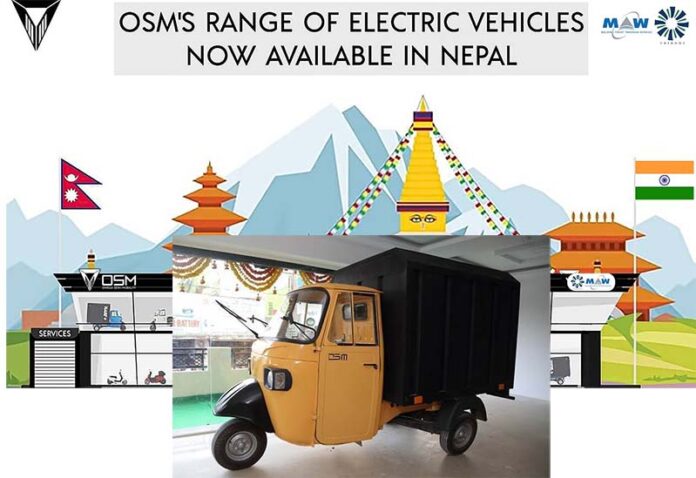 EV maker Omega Seiki Mobility (OSM) has formed a strategic partnership with Kathmandu based MAW Vriddhi Commercial Vehicle to retail its vehicles in Nepal, according to a release. This association will enable OSM to meet the evolving needs of a customer base, which is rapidly looking for a sustainable and zero-emission last-mile transportation solution in the growing Nepalese market, the Faridabad-headquartered electric vehicle manufacturer said in the release. The agreement with MAW Vriddhi, the second largest automobile group in Nepal, will also mark OSM’s entry into the Himalayan nation, it added.

Omega Seiki said it will be offering the entire range of its Rage Plus — Plus, Plus Rapid, Plus 125, Plus Frost — e-three wheelers and e-rickshaw ADM Rexa for retailing in the neighbouring country through its exclusive partnership with MAW Vriddhi. Besides, facilitating vehicles’ retail, the company’s touchpoints will also serve as service centres for OSM EVs, it added. Electric vehicles have been plying on Nepalese roads for nearly three decades now, but they comprise just about 1 per cent of the total vehicle registrations in the country, according to OSM. And as much as 80 per cent of these EVs are three-wheelers, the company said, citing a survey by the Nepalese government. “India and Nepal are two close allies.

I am very excited to announce OSM’s association with MAW Vriddhi Commercial Vehicle, which is one of the largest CV players in Nepal. The alliance will allow us to expand our partnership to help businesses enhance their profitability, which is trying to switch to sustainable last-mile transportation” said Uday Narang, founderChairman, Omega Seiki Mobility.

This is also a major step in OSM’s attempt to take Indian manufacturing to the global map, Narang added. Vivek Sikaria, Managing Director, MAW Vriddhi Commercial Vehicle, said, “We are proud to cooperate with Omega Seiki Mobility. We continue to expand our partnership with large electric vehicle manufacturers in a bid to make it easier for auto rickshaw drivers to shift to economical, highly profitable, and less pollutive vehicles in Nepal”.

Omega Seiki Mobility has been growing its product line up and manufacturing footprint rapidly in India, the release said, adding it has set up large scale manufacturing facilities in Delhi-NCR and now looking to expand in Pune. MAW Vriddhi is a joint venture between MAW and Vriddhi Group of companies, which is involved in the commercial vehicle business. With over 17 brands under its belt, the company offers more than 265 touchpoints. Omega Seiki Mobility (OSM) and MAW Vriddhi Commercial Vehicle, the second largest automobile group in Nepal have entered into a strategic partnership for retailing OSM’s range of made-in-India electric vehicles in Nepal. As per the understanding OSM vehicles will be sold by MAW Vriddhi Commercial Vehicle in Nepal. In addition, the company’s touchpoints will also serve as service centres for the vehicles.