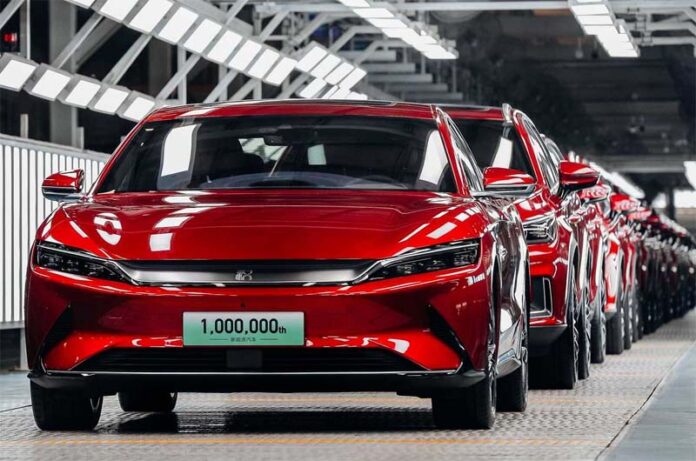 The one-millionth car, the Han EV, rolled off the production line recently at BYD’s headquarters and manufacturing facility in Shenzhen.

At a special ceremony, VIPs from Government departments, industry associations, BYD’s partners and suppliers, more than 400 media guests, and about 100 BYD vehicle owners, gathered to mark the occasion.

At BYD’s global headquarters, car owners assembled their vehicles in a specially choreographed display forming the number ‘1,000,000’ to help celebrate the milestone

The landmark moment in BYD’s history coincides with the announcement that the first batch of 100 pure-electric BYD Tang SUVs are now ready for delivery to Norway. BYD also announced that a total of 1,500 Tang SUVs will be delivered to Norway before the end of the year as the company commits to accelerating its European and global strategies.

“BYD shoulders the responsibility and mission of upward development for China’s new energy vehicle brands,” said Mr. Wang Chuanfu, Chairman and President of BYD Co., Ltd. “From zero to one million vehicles, this is BYD’s response to the call for global auto industry transformation. It also sets a benchmark in the journey of the new energy vehicle industry in China starting from nothing, alongside the greater national journey for a country dominated by traditional automobiles to one that is a leader in the field of sustainability,” he added.