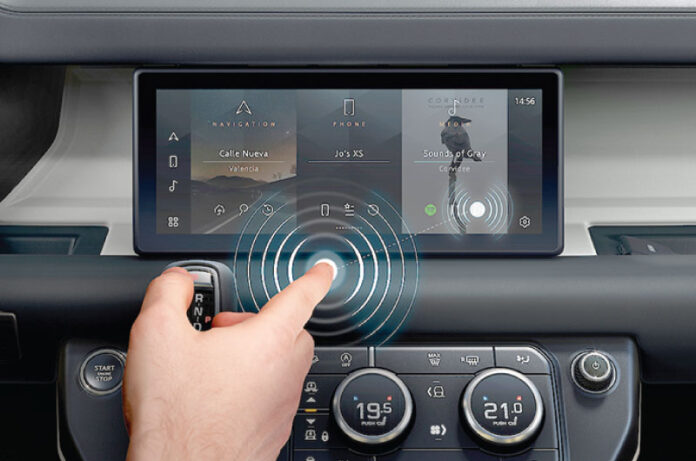 Jaguar Land Rover and the University of Cambridge have developed a new contactless touchscreen technology that will help keep drivers’ eyes on the road and reduce the spread of bacteria and viruses in a post COVID-19 world.

The patented technology, known as ‛Predictive Touch’, uses artificial intelligence and sensors to predict a user’s intended target on the touchscreen – whether that’s satellite navigation, temperature controls or entertainment settings – without touching a button.

The pioneering system, developed with engineers at the University of Cambridge, is part of Jaguar Land Rover’s Destination Zero vision – a desire to make its vehicles safer and the environment cleaner and healthier, said a company press release.

Lab-tests and on-road trials showed the predictive touch technology could reduce a driver’s touchscreen interaction effort and time by up to 50 per cent, as well as limiting the spread of bacteria and viruses.

The technology uses artificial intelligence to determine the item the user intends to select on the screen early in the pointing task, speeding up the interaction. A gesture tracker uses vision-based or radio frequency-based sensors, which are increasingly common in consumer electronics, to combine contextual information such as user profile, interface design and environmental conditions with data available from other sensors, such as an eye-gaze tracker, to infer the user’s intent in real time.

Mr Lee Skrypchuk, Human Machine Interface Technical Specialist, at Jaguar Land Rover, said: “As countries around the world exit lockdown, we notice how many everyday consumer transactions are conducted using touchscreens: railway or cinema tickets, ATMs, airport check-ins and supermarket self-service checkouts, as well as many industrial and manufacturing applications. Predictive Touch technology eliminates the need to touch an interactive display and could therefore reduce the risk of spreading bacteria or viruses on surfaces.”

Prof Simon Godsill from Cambridge University’s Department of Engineering led the project. He said: “Touchscreens and other interactive displays are something most people use multiple times per day, but they can be difficult to use while in motion, whether that’s driving a car or changing the music on your phone while you’re running. We also know that certain pathogens can be transmitted via surfaces, so this technology could help reduce the risk for that type of transmission.”