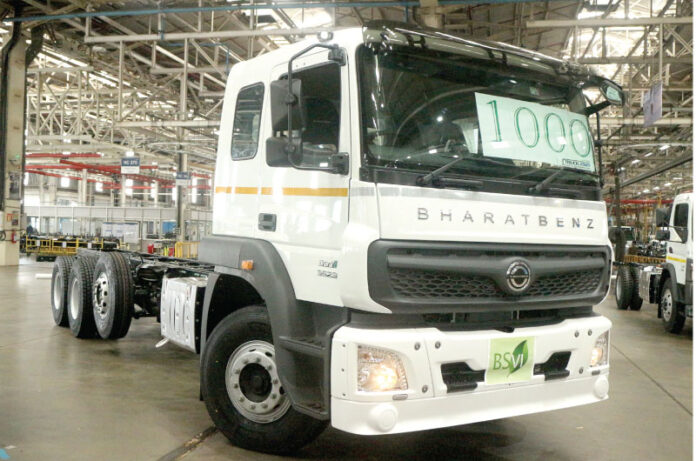 Daimler India Commercial Vehicles (DICV) recently announced the production of its 1,000th BS-VI heavy duty truck, one of over 1,500 BSVI-compliant vehicles the company has manufactured in the last few months despite the ongoing lockdown.

Mr. Rajaram Krishnamurthy, Vice-President Marketing & Sales and Customer Service, DICV, said, “Since premiering our new BharatBenz portfolio of BSVI-compliant trucks and buses in January, we have been steadily increasing our lead in the industry. This is proved again now as we celebrate the production of our 1000th BSVI-compliant Heavy Duty Truck.”

The truck was a 3523R model, bound for one of the 235+ touch-points in BharatBenz’s rapidly expanding Indian network of dealerships before it makes its way to the customer.

DICV celebrated a further production milestone with the SoP for its updated 4228R model, a truck that has traditionally been one of the company’s high volume sellers.

Although production has recently proved a challenge for many manufacturers in the automotive industry, DICV has remained firmly on track throughout the disruptions caused by the COVID-19 pandemic. While part of this success comes from a 80 pc+ localisation rate for BS-VI components, DICV’s MD and CEO Mr Satyakam Arya also credits the business’s sustainability to the comprehensive care shown to stakeholders.

“One of DICV’s core values is the belief that ‘We Progress Together’. We support our stakeholders through the hard times and we celebrate with them in the good times. Today, we celebrate these new production milestones both with them and thanks to them,” commented Mr Arya.