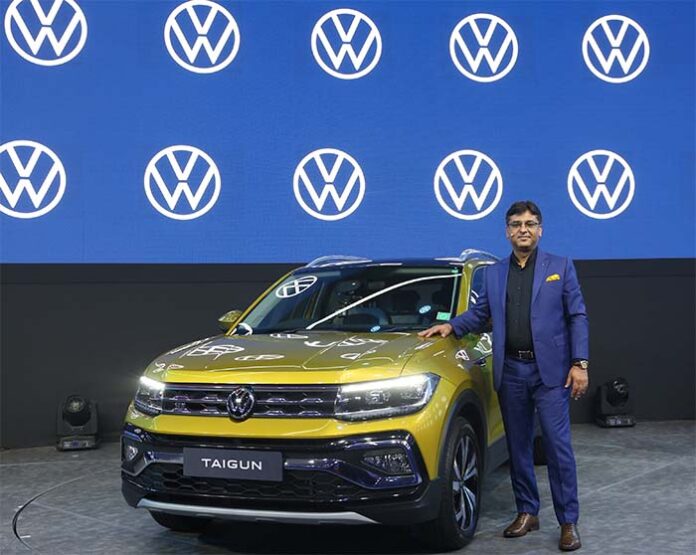 Dressed to make head turns, Taigun imbibes the global lineage and language of a Volkswagen, said a press release by the company. It boasts a charismatic design language – the exterior exudes strength and the robust stance of an SUV, while the interiors offer a premium appeal, sense of spaciousness and a host of features for the comfort and convenience of the occupants, it said further.

Taigun is the first product offering by the brand in the mid-size SUV segment. It has the largest wheelbase in the segment of 2,651 mm that makes the interiors extremely roomy and spacious, according to the company release.

Speaking at the launch, Mr. Ashish Gupta, Brand Director, Volkswagen Passenger Cars India, said, “Today is a significant moment for all of us at Volkswagen, as we launch the new Volkswagen Taigun. The bold, dynamic, German-engineered SUVW Taigun will be a game-changer in India’s mid-size SUV segment.”

A prominent front grille with a generous chrome applique, LED headlights and DRLs that greet the Taigun customer even before the drive starts – they are intelligently controlled and can illuminate the road as brightly as possible without dazzling the other road users. Providing a higher stance and on-road presence, the R17 Manila alloy wheels contribute to the striking appearance of the Taigun.

Taigun has the most distinctive rear within its segment. The width spanning C-shaped Infinity LED tail lamps mark a strong rear-end design and further add a superior and sporty character to the overall aesthetics of the Taigun.

Taigun also comes equipped with the locally developed MyVolkswagen Connect App that is a one stop application for customer convenience.

It comes with a full range of 40+ safety features such as Electronic Stability Control (ESC), Anti-Lock Braking System (ABS), up to six airbags, multi-collision brakes, three headrests at the rear, reverse camera, three-point seat belts, ISOFIX and an adjustable headrest for all and tyre pressure deflation warning system.