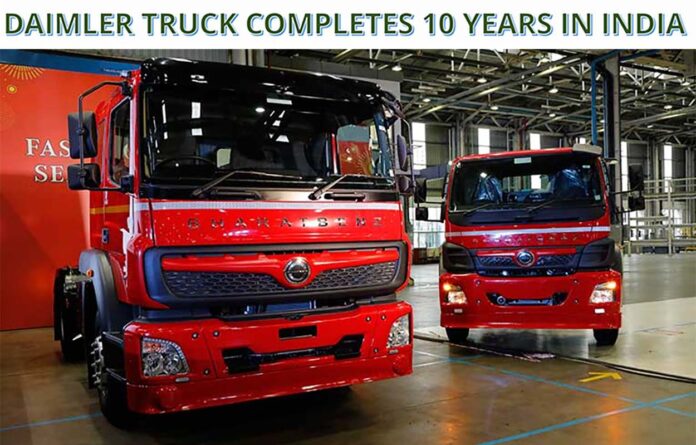 Daimler India Commercial Vehicles Pvt. Ltd. (DICV), a wholly-owned subsidiary of Daimler Truck AG, celebrated the completion of 10 successful years of operations in India. DICV started its operations in 2012 with an aim to transform the Indian commercial vehicle industry with new benchmarks in engineering, technology, safety and comfort in BharatBenz trucks and buses. In its first decade in the Indian market, DICV achieved domestic sales of more than 125,000 vehicles, exported over 50,000 vehicles and more than 200 million parts to over 60 countries around the world.

Mr. Satyakam Arya – Managing Director & CEO, Daimler India Commercial Vehicles said, “In the past decade, we have set new benchmarks in the Indian CV industry by introducing fully-built, factory-fitted truck cabins, we were the first CV manufacturer to launch trucks and buses with BSVI engines and have set high standards of quality, safety and comfort in the market. We have achieved sustainable growth in our domestic as well as exports businesses and have a plan to accelerate our foray in these two areas, in the coming years. A few key objectives for the next decade are to achieve 100% carbon neutrality in our operations by 2025, become a 100% paper-free organization by the end of 2023, increase energy self-reliance and have a sharper focus on workplace diversity and culture.”

DICV has a 4000+ diverse, direct and indirect workforce across its plant operations in Oragadam, Global Capability Centre in Chennai and regional offices across India. The company has created over 60,000 jobs in its ecosystem covering dealers, suppliers and other stakeholders and has plans to enhance its diversity through a number of initiatives that will have a positive effect on the business and culture of the organization.

DICV is committed to sustainability in a big way. The OEM currently uses 85% of its energy from renewable sources. The company has already harnessed solar energy for its manufacturing facility in Oragadam and has laid the foundation for an additional capacity of 1.3MW solar photovoltaic plant along its world class test track in its sprawling 430-acre facility. DICV’s existing solar energy plant already has a capacity of 3.3MW. The OEM has already achieved 100% recycling of water and does not depend on external sources of water for manufacturing. DICV is working towards becoming 100% carbon-free by 2025.

In 2012, DICV launched BharatBenz trucks in India. Within a decade, brand BharatBenz has established itself as a formidable contender in a highly competitive market in the HDT and MDT segments of the Indian commercial vehicles industry. BharatBenz trucks and buses are retailed and serviced out of 275+ sales and service touch points across the country.

DICV has launched the ‘Dashak Edition’ of BharatBenz 1617 MDT and 5528 HDT trucks in Fiery Red colour and a 36-seater bus in Pearl White. In addition to special features, the ‘Dashak Edition’ trucks and bus will sport a ‘Dashak’ decal to commemorate its 10th year Anniversary. The1617 Medium-duty truck (MDT), fully loaded with air-conditioning, music system and cameras, is introduced for e-commerce and express delivery fleet operators for a safe and comfortable experience for shorter distances. The BharatBenz 5528 prime mover heavy duty truck (HDT) for long haul, specifically tailored for steel, cement and construction aggregates movement. DICV has invested over INR 9,500 crores in its state-of-the-art green field manufacturing plant in Oragadam near Chennai. The facility is also home to an indigenous R&D centre that caters to its Indian as well as Daimler Truck Global requirements.