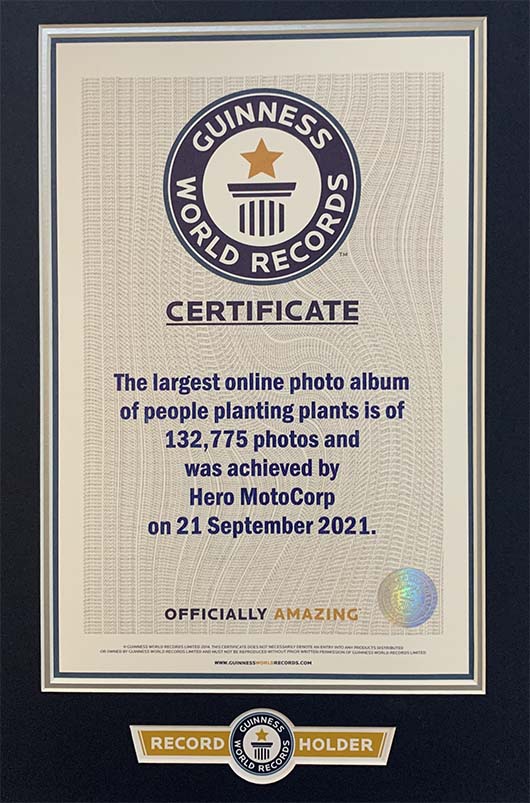 Hero MotoCorp has been recognized by Guinness World Record for creating the ‘Largest Online Photo Album of People Planting Plants’. As a part of the Hero Green Drive initiative, a total number of 132,775 images of people planting plants were received to achieve this prestigious title.

This is the second consecutive world record by Hero MotoCorp in quick succession after being recognized by Guinness World Records for creating the ‘Largest Motorcycle Logo’ in August 2021.  The logo was made with 1845 of Splendor+ – the country’s most iconic commuter motorcycle – at its manufacturing unit in Chittoor, Andhra Pradesh.

The record for the ‘Largest Photo Album of People Planting Plants’ was announced to mark the International Zero Emissions Day on September 21, 2021 and is in continuation of the celebrations with regard to the Company’s achievement of the monumental milestone of 100 million vehicles in cumulative production on January 21, 2021.

Commenting on the occasion, Mr. Malo Le Masson, Head of Global Product Planning and Strategy, Hero MotoCorp said, “The year 2021 began with a lot of excitement as we celebrated the monumental milestone of 100 Million cumulative sales. Since then, we have had several significant milestones such as the 10th anniversary year of the Hero Brand, Guinness World Records™️ of the Largest Motorcycle Logo, record sales of one lakh units in a single day and now Guinness World Records™️ title for the ‘Largest Online Photo Album of People Planting Plants’, with 137,775 plants being planted and recorded on picture.  Through this record, we have proven that Hero MotoCorp is committed to make our planet greener, while still abiding to strict covid-19 protocols.”

Mr. Swapnil Dangarikar, Official Adjudicator from Guinness World Records said, “I am extremely delighted to award yet another Guinness World Records official certificate to Hero MotoCorp for their outstanding achievement to create the largest online photo album of people planting plants. With 132,775 photos uploaded to the album, Hero MotoCorp has made a noble effort to get people to plant plants and thus make everyone a part of an initiative to make a greener world. Hero MotoCorp, you are once again, Officially Amazing!”

The GUINNESS WORLD RECORDS™ Adjudicator was virtually present to witness the world record attempt and determine the veracity of the activity with support from independent witnesses, who were appointed as per official guidelines.

The Company kicked-off the celebrations in January 2021 when its 100 millionth motorcycle, the Xtreme 160R, was rolled-out of its manufacturing facility in Haridwar, Uttarakhand.

Hero MotoCorp – under its Corporate Social Responsibility (CSR) platform, ‘Hero WeCare’, has planted more than 2.37 Million trees till date, conserved 82 Million litres of water, and saved up to 30 Million units of electricity per year by replacing traditional bulbs with 100,000 LED lights in various districts.

Skoda comes up with matte edition of...

Skoda Auto has introduced a new matte edition of Rapid in the country. It will be available in an exclusive carbon steel matte colour...
Read more
New Launches

Electric two-wheeler manufacturer Okinawa Autotech is set to go 100 per cent localised by the end of this fiscal year. According to a press release,...
Read more
- Advertisment -