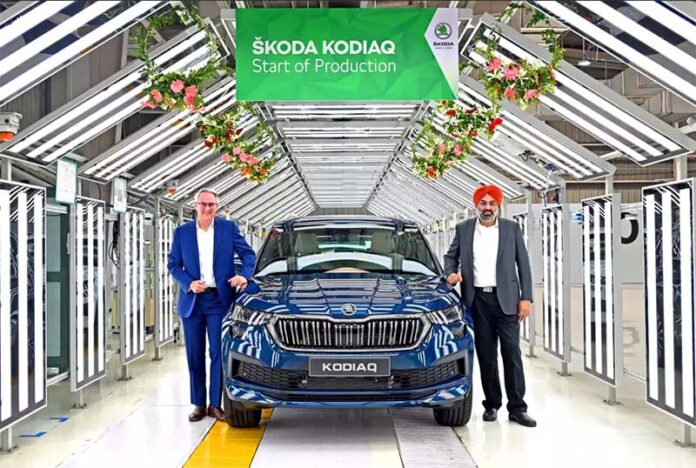 Skoda Auto on 13th December said it has started production of the new Kodiaq SUV at its manufacturing facility in Aurangabad, Maharashtra. Skoda Kodiaq was first introduced to India and the world in 2017 when the 7-seater SUV was priced at INR 3,449,501 across the country. It was competing with the likes of Toyota Fortuner, the Ford Endeavour and the Volkswagen Tiguan.

The 2021 model is built on the internationally recognised MQB platform. The SUV has design and aerodynamic improvements on the outside and in the cabin, the Czech carmaker said. Customers can book the new model at their nearest dealerships or through the company’s India website.

Gurpratap Boparai, Managing Director ŠKODA AUTO Volkswagen India Private Limited, said, “The New KODIAQ is part of the overall SUV offensive of the Group in India. With the start of production at our world-class facility in Aurangabad, we add yet another product that provides the Indian customer with the best of technology, safety and comfort.” Zac Hollis, Brand Director, ŠKODA AUTO India, said, “The New KODIAQ is the second SUV to be introduced in India this year by ŠKODA. We believe that the offerings of the New KODIAQ will lead connoisseurs of design and aesthetics to appreciate the SUV even more.” In June this year, the carmaker forayed into the midsize SUV segment and launched Kushaq SUV with an introductory price of INR 10,49,000 (ex-showroom) going up to INR 17,59,999 in India.