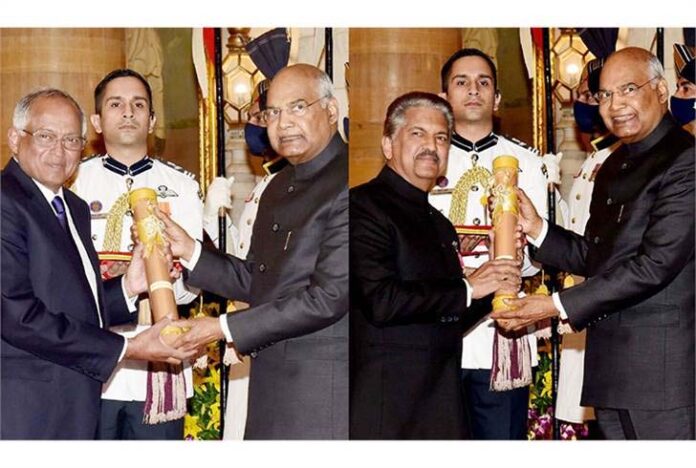 Mr Venu Srinivasan, Chairman of TVS Group and Mr Anand Mahindra, Chairman of Mahindra Group, were conferred with Padma Bhushan awards by the President, Mr Rama Nath Kovind, at a ceremony in Rashtrapati Bhavan on November 8.

It was part of the Civil Investiture Ceremony-II in which three Padma Vibhushan, eight Padma Bhushan and 61 Padma Shri Awards for the year 2020 were awarded. The Vice-President, Mr M Venkaiah Naidu, the Prime Minister, Mr Narendra Modi, Union Minister for Home Affairs, Mr Amit Shah, and other dignitaries were also present at the ceremony. .

Mr Srinivasan and Mr Mahindra were honoured for their ‘distinguished service in the field of trade and industry’. This is the second such honour for the two automotive industry stalwarts. In 2010, both were conferred with Padma Shri awards.

Mr Srinivasan is known to be passionate about his commitment to society through a unique model of village development in South India. The TVS Group, which he heads, includes Sundaram-Clayton and TVS Motor Company, one of the country’s leading two-wheeler and three-wheeler manufacturers.

Mahindra & Mahindra Ltd (M&M) has entered the World Index list of companies in the Dow Jones Sustainability Index (DJSI) 2021. Out of the five...
Read more
- Advertisment -