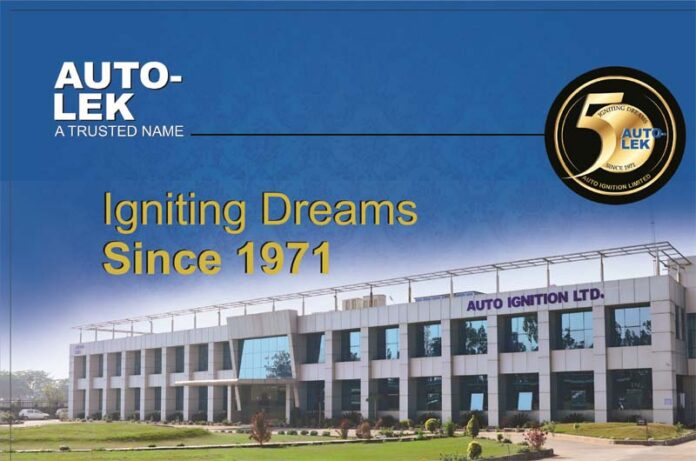 Five decades ago, Mr RK Sarine, an alumnus of BITS, Pilani, with work experience from Prestolite, USA, embarked upon changing the landscape of the automotive industry in the county. As a pioneer of the only fully Indian start-up for manufacturing starter motors, alternators and other electrical components, he set the stage for others to follow. It was a time when start-ups did not have the same cachet that they have today. Global brands like Bosch, Prestolite and Lucas ruled the Indian market. To take on such giants not only needed technical wherewithal but also a never-say-die- spirit and Mr Sarine had it in abundance. Thus was born Auto Ignition Ltd and the brand Autolek.

Mr Sarine started his entrepreneurial journey from a small, rented shed in Faridabad with a capital of Rs. 5,000 and a handful of people, all trained by him. The company was incorporated on August 5, 1971 and it commenced manufacturing ignition coils soon thereafter.

From such humble beginnings, the company grew in strength year after year and added a slew of products to its bouquet. Its first OE customer for ignition cells was Hindustan Motors Ltd. Eventually, when the ignition coils went the electronic way, the company shifted its focus to starter motors and alternators.

Mr Sarine then sensed an opportunity to address the tractor segment as the aftermarket demand for these products was high and abuse rampant. The company set out to make the products robust and tested these under very adverse environmental test chambers. This ability to withstand the abuse remains the hallmark of Autolek products till this day and the first OE customer in the tractor segment continues to be the largest customer of the company till date.

Autolek starter motors and alternators are supplies to almost all the tractor and generator manufacturing customers in the country. In the last five years, the company has added three overseas OEMs to its list of clients. Today, the company exports its products to more than 30 countries in five continents, has a turnover of Rs. 400 crore and aims to hit Rs. 1,000 crore mark within the next five years.

Auto Ignition Ltd now has two plants, one at Prithla in Haryana and the other in Rudrapur, Uttarakhand, and it employs about 1,000 people. It manufactures one of the widest range of starter motors from 1 KW to 9.5 KW and alternators from 23 amps to 150 amps. It is also the only company in the country to make starter motors of the direct-on variety and gear-reduction motors of planetary gear and offset gear technologies.

The company has invested heavily in R&D and has come up with several cutting-edge designs. Its R&D centre has been recognised by the Government as a Centre of Excellence. It has also catalysed new systems and processes with a view to integrating Industry 4.0 principles. As it celebrates its Golden Jubilee on August 5 this year, Auto Ignition Ltd has really come a long way and it is committed to carry the journey forward with renewed energy and dynamism.

Today, the reins of the company are in the hands of Mr. Ishaan Sarine, grandson of the founder Mr RK Sarine. Ever since he took over in 2013, he has steered the company to a more innovative and responsive company geared to the changing dynamics enveloping the ecosystem.

Mr Mohan Narayanan, the current President and CEO who also joined in 2013, translated his rich experience culled from leading companies like Escorts, Goetze, Mahle, Brico, Teikoku Piston Ring Company and Federal Mogul, to make the company more system-oriented and professional. After completing nearly 50 years in the automotive Industry, Mr Narayanan would be retiring at the end of the year and Mr Rajendra Abhange, who was formerly Technical Director with Gabriel India and has prior experience in Bosch, would be taking over from him.

With such a rich legacy to boast of, the company refuses to rest on its laurels and is determined to make bigger strides. It will soon be foraying into electric mobility and start making EV motors and controllers. The prototype with unique technical features has already been developed and the product launch is set for the first quarter 2023.

Overwhelmed at the glorious milestone it has achieved, Auto Ignition feels indebted to all the stakeholders, customers, suppliers, and employees who have supported it all through the golden run and seeks their unstinted support in the next phase of its journey.