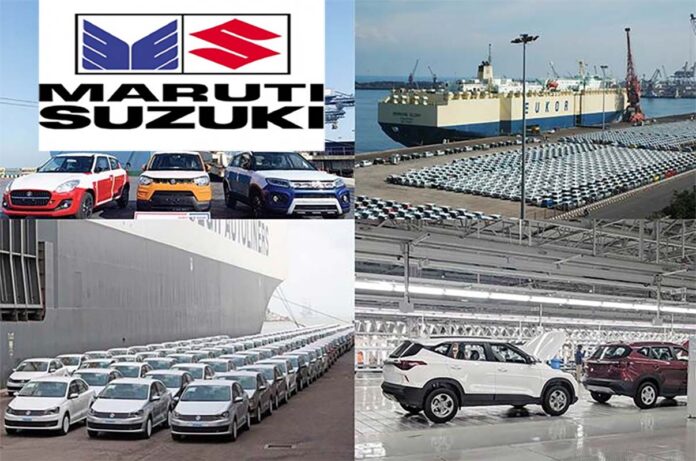 Maruti Suzuki, which sells one out of every two passenger vehicles in India, is targeting to also make half the number of cars exported from the country in the next three years, people in the know of its plans said. The Indian subsidiary of Suzuki Motor plans to leverage the global resources of the Japanese parent and its alliance partner, Toyota Motor, to increase its overseas shipments, which in the last fiscal year accounted for a little over 40% of the exports from India.

For Suzuki and Toyota, India is set to become a key sourcing hub for not just vehicles, but also for components including lithium-ion cells for electric vehicles, the people said. Maruti Suzuki is aiming to export vehicles and components worth up to $2.5 billion (₹20,000 crore) in the next three years, according to its filings with stock exchanges under a new rule on related-party disclosures.

The export turnover approval limit of Rs 20,000 crore for fiscal 2025 indicates the shipments would be more than 350,000 units, considering an average Rs 5.5 lakh per vehicle. That would be nearly half India’s passenger vehicle exports projected for that year, the people said. Executive Director Rahul Bharti did not specifically comment on the numbers, but said exports had been growing strongly and that the company expected the momentum to continue.

Maruti Suzuki had overtaken Hyundai Motor India in fiscal 2022 as India’s top passenger vehicle exporter, accounting for more than 238,000 of the 570,000 units exported from India. Revenue from exports last fiscal year was Rs 12,000 crore, more than double its average export earnings between FY16 and FY21 when it shipped an average 100,000 vehicles a year. In an export market that grew 42% in FY22, Maruti Suzuki’s overseas volume jumped 147%. The Dzire compact sedan is its highest exported vehicle in the last fiscal year, followed by the Baleno and Swift hatchbacks.

The company expanded its overseas network using the parent’s infrastructure, said Bharti. Also, “our agility helped to tap the market where peers are struggling to ramp up volume after the first wave of Covid”. Shortage of semiconductors, which had hurt local production for Maruti Suzuki and other automakers, did not affect the company’s exports as the component for exports was sourced from a different vendor, he said. Maruti Suzuki is shipping vehicles to nearly 100 countries. South Africa was the top export market for the company last fiscal year, followed by Chile, Egypt, the Philippines and Columbia. The best practices it employs in India worked well in other emerging markets as well, Bharti said. In the first quarter of FY23, Maruti realisation per car on export was Rs 5.24 lakh, slightly lower than the Rs 5.40 lakh it made per vehicle on overall sales. Export value was the highest ever for a quarter at Rs 3,600 crore, with it shipping 69,437 units.