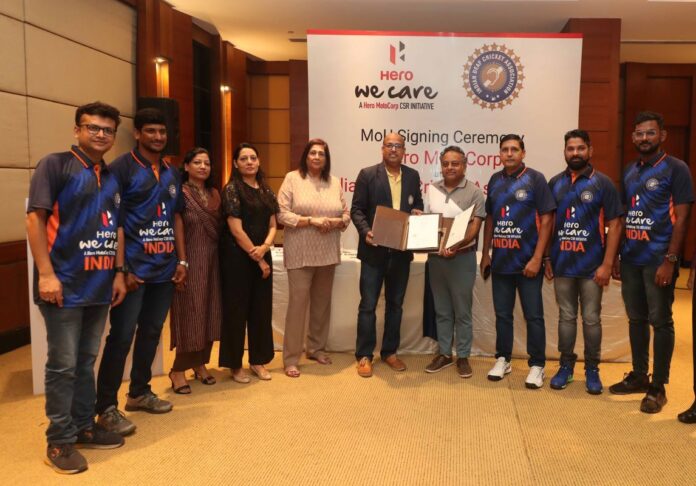 Hero MotoCorp Ltd, the world’s largest manufacturer of motorcycles and scooters, recently announced a partnership with the Indian Deaf Cricket Association (IDCA).  Affirming its long-term support to the specially-abled team for a social cause as part of its Corporate Social Responsibility (CSR) initiative ‘Khelo Hero’ under the umbrella platform ‘Hero We Care’, the Company signed a Memorandum of Understanding (MoU) with IDCA here today in the presence of the players and senior officials.

As part of the partnership, Hero MotoCorp – one of the largest corporate promoters of sports globally – will provide the necessary training equipment to the IDCA team for the upcoming Deaf International Cricket Council (DICC) T20 Champions Trophy 2022, to be held in Sharjah, UAE between October 1-9 and the National Championships to be held later this year. Hero MotoCorp is also supporting a training camp that has been organised between September 16-29 to prepare the team for the global tournament.

Elated with this partnership, Roma Balwani, CEO of IDCA said, “This long-term partnership of IDCA & Hero MotoCorp will immensely help in nurturing our players to prepare not only for the upcoming event by organising the training sessions and also providing best-in-class equipment for the same, but also for future training camps as well. We thank them for believing in us and supporting us for this noble cause.”

Sumit Jain, President of IDCA, said, “We are thankful to Hero MotoCorp for supporting us for the upcoming championship. This generous gesture will help us in creating a best-in-class team with talents from across India and train them to participate in national & international tournaments.”

Bharatendu Kabi, Head – Corporate Social Responsibility (CSR) & Corporate Communication, Hero MotoCorp, said “As a responsible corporate citizen, we believe in contributing meaningfully towards the overall wellbeing of society by supporting healthcare, education and sports among the youth. In keeping with this commitment, we are delighted to collaborate with the Indian Deaf Cricket Association and support the team for the upcoming T20 Champions Trophy 2022 (UAE). We are sure they will make the country proud by their performance in the championship. We will also continue to support the team as they prepare for the upcoming National Championships in India.”

The specially-abled team India is set to put its best foot forward against the competing countries in the upcoming DICC T20 Champions Trophy 2022 in UAE. IDCA has also rolled out the #DareToDream campaign to promote differently-abled cricket and to drive other developmental aspects around the lives of the differently-abled youth in the country. They have also partnered with INOX cinemas, Vistara, IndiGo and JW Marriott New Delhi Aerocity  for the upcoming event.