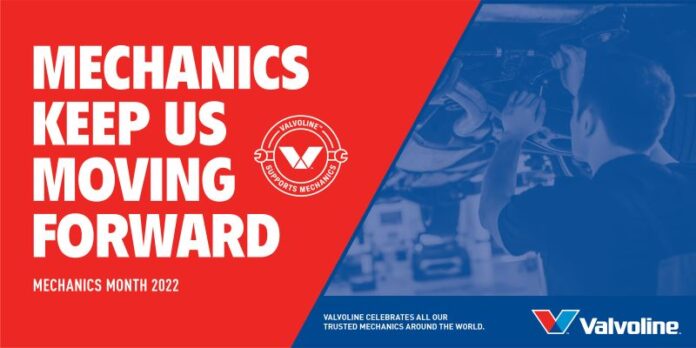 Valvoline Cummins Private Limited (“Valvoline Cummins”), the Original Engine Oil maker and a leading global lubricant manufacturer powering the future of mobility through innovative services and products, announced the 2nd edition of mechanic month campaign in India. Themed – ‘keeping the world moving forward’, the campaign is aimed at honoring mechanics and express gratitude for their ongoing, everyday service and encourage people to thank their mechanics.

The month-long campaign will honor mechanics in numerous countries and will celebrate their importance as knowledgeable professionals critical to keeping engines running – and people moving forward. Mechanics play a key role in the ownership experience of any vehicle and many of us have stories of how a mechanic went over and above their role to help us with a gear box change at night or helped us jump start a car in the middle of nowhere when the car battery gave up.

As part of the campaign, Valvoline Cummins is encouraging the people to express gratitude towards mechanics to keep the world moving forward. The campaign will be activated through different touch points like radio, digital and on-ground

“Last year’s campaign recognized the role mechanics played in keeping essential personnel on the road,” said Ipshita Chowdhury, Head of Marketing, Valvoline Cummins. “Our focus for 2022 is about celebrating their significant role in keeping us all moving forward.”

“We are thrilled to announce the second edition of Mechanic Month in which we will celebrate our association with the mechanic community and honor their critical role in keeping the world moving forward,” said Sandeep Kalia, Managing Director, Valvoline Cummins. “These unsung heroes often go unappreciated and is the reason why we organize these annual global campaigns as a token of gratitude and appreciation and to enhance consumer awareness towards their efforts. A big thank you to all my mechanic friends on behalf of entire Valvoline for your continued extra ordinary support to keep us all moving forward.”

Valvoline has long been a supporter of mechanics through various programs and campaigns throughout its more than 150-year history. Since the inaugural launch of the Mechanics’ Month initiative in 2020, participation has grown from 15 countries to an additional 50 expected for this

year’s observance. Valvoline leadership credits Mechanics’ Month’s overall uniqueness in the category and its broad reach and relevance as catalysts for increased adoption around the world.

In India, Valvoline Cummins manufactures a wide range of fluids, viz., engine oils, gear oils, radiator coolants, brake fluids etc. for engines made by various OEMs. Valvoline Cummins firmly believes that its growth potential lies in the quality of execution, power to innovate and in its resolve to remain a step ahead of market demands. Its mission as a brand is to leverage real-world insights to provide valuable tools that generate success for its customers and users.