EESL sets up a public charging station at HAREDA, Panchkula 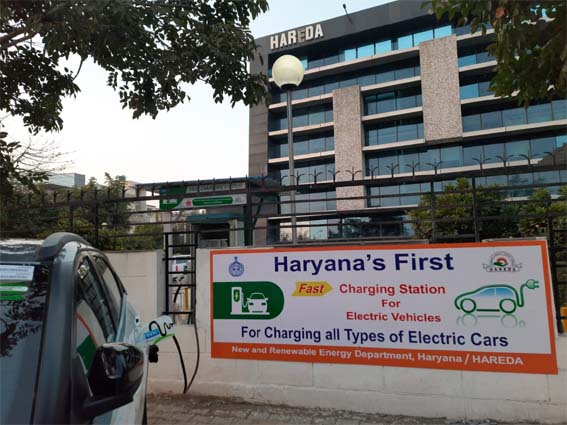 With a view to promoting e-mobility in Haryana, a public charging station for all types of electric cars was opened at the head office of HAREDA in Panchkula on January 4.

Capable of charging any type or model of EV, this is the first-of-its-kind charging station in North India where all types of electric cars can be charged free of cost.

It has been set up by Energy Efficiency Services Limited (EESL), a JV of public sector undertakings under the Ministry of Power, as part of an agreement with the Haryana Renewable Energy Department Agency (HAREDA). The installation is part of EESL’s PCS pilot phase in the state and will be open to public for use, free of cost. HAREDA will bear its entire cost of installation and maintenance.

The dignitaries also flagged off five EVs which were handed over by EESL to HAREDA on a dry-lease monthly agreement. Among the five EVs, a Hyundai Kona EV has been deployed at the head office of the Department in Panchkula while one Tata Nexon EV each will be deployed in district offices of the Department in Gurugram, Faridabad, Panchkula and Karnal.

Inaugurating the EV charging station, Mr Kapoor said, “This one-of-its kind public charging station gives EV owners the freedom to choose their preferred EV, based on their respective mobility needs. With charging infrastructure that can address local needs, Haryana has the potential to greatly accelerate EV adoption and reduce the dependence on fossil fuels, thereby reducing the vehicular emissions and decreasing India’s import of petrol-based fuels.”

Mr Gupta said for speedy implementation of e-mobility scheme of the Government of India and to reduce carbon emission, the New and Renewable Energy Department, Haryana, has been designated as the state nodal agency for creation of charging infrastructure for electric vehicles in the state. The installation of EV charging station for all types of e-cars in the head office is the first step towards providing facility for EV charging to the owners of the e-vehicles in the state specially residents of tri city.”

Dr. Qureshi said that e-vehicles are the only solution to address increasing vehicular pollution in the country. “For the promotion of the e-vehicle, the first step is to provide charging facility in the state. HAREDA is committed to create infrastructure for EV charging facility all over Haryana, but in the first phase highways and major cities will be covered.”