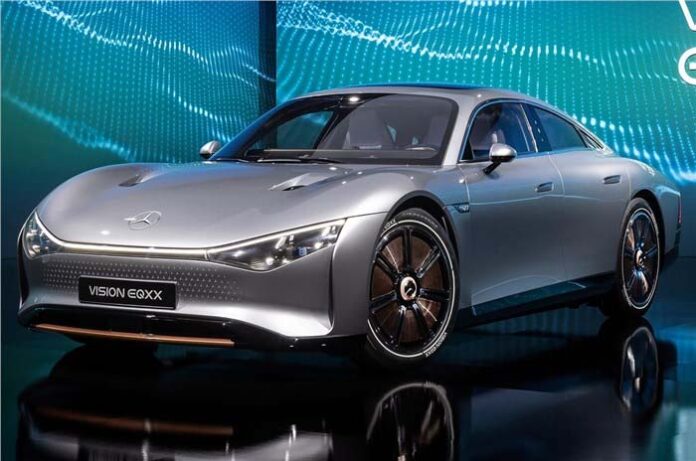 Mercedes-Benz has unveiled an electric concept car, Vision EQXX, which it says will be capable of exceeding a range of 1,000 km on a single charge, taking a big stride in its electric vehicle (EV) ambitions.

Daimler, soon to be rebranded Mercedes-Benz, announced plans in 2021 to invest more than 40 billion euros ($45 billion) by 2030 to take on Tesla in an all-electric car market, including building eight battery plants. From 2025, all its new vehicle platforms will only make EVs, it has said. The VISION EQXX, dubbed the most-efficient Mercedes-Benz ever built, will have energy consumption of less than 10 kilowatt hours (kWh) per 100 km, said Daimler.

“The Mercedes-Benz VISION EQXX is how we imagine the future of electric cars,” Mercedes-Benz CEO Ola Kaellenius said. Daimler will test-drive the prototype before the middle of the year on various types of terrain, Chief Technology Officer (CTO) Markus Schaefer told journalists.

Some components of the prototype would be available in Mercedes-Benz vehicles within two to three years, Schaefer said. However, the CTO declined to specify when the 1,000 km range battery would be market-ready. “We will likely be the first to show a 1,000 km-range car in real life, with such a small battery,” Schaefer said. When such a vehicle would go on sale is a “market decision” to be determined once the carmaker had established how much range customers expected and what they would be willing to pay, he said.

The prototype, built within 18 months, “puts an end to range anxiety,” Mercedes-Benz said, referring to one of the key obstacles for why EVs have not been in higher demand. This required developing a new battery pack, which the company says would fit into a compact vehicle and whose energy density – measuring how much power batteries can hold compared to their size – stands at close to 400 watt hours per litre.