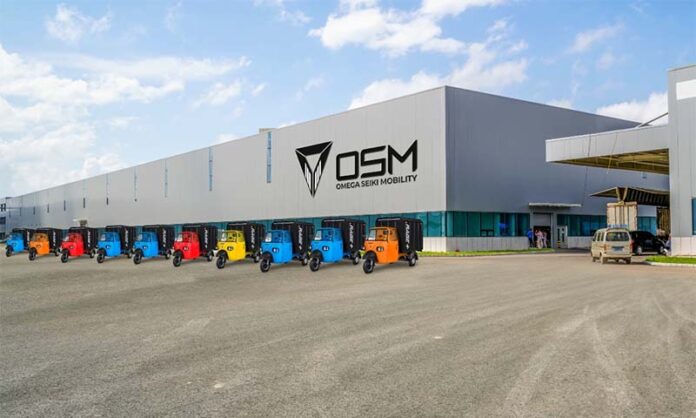 On the occasion of World Earth Day, Omega Seiki Mobility (OSM) announced that they will be setting up the World’s Largest Electric three-wheeler manufacturing unit in the state of Karnataka with an investment of USD 250 million. The new facility will be built in three phases and will have a production capacity of 1 million electric three wheelers per annum. The company will be raising funding in the form of equity as well as debt to build the OSM Mega factory which is slated to commence production by FY 24.

The revolutionary new facility will be supplemented by its own supply chain of powertrains and battery packs. OSM is also in active negotiation with existing as well as new suppliers for setting up ancillary manufacturing facilities in the vicinity of the OSM Mega factory which will be built over an area of 250 acres.

Omega Seiki Mobility is a market leader with its Rage+ brand of electric cargo 3 wheelers ( as per data from Vahaan Portal in L5N category). The new manufacturing plant will produce an entire range of Omega Seiki Mobility electric three wheeler vehicles which include Rage+, Rage+ RapidEV, Rage+ Frost, Rage+ Swap, and Rage+ Tipper. Besides, the new plant will also be manufacturing the soon to be introduced OSM Stream which will be an electric three-wheeler passenger carrier.

Speaking on the OSM Mega factory Mr. Uday Narang, Chairman and Founder, OSM,said “The organised electric three-wheeler market has exponentially grown by a massive 200% in FY22 as against the previous fiscal. This has helped EV 3 wheelers now command a massive 46% of overall three-wheeler volumes. We at OSM believe that adoption of EVs in the last-mile delivery sector and government bodies will help India become the first market in the world where every 3 EV three-wheeler will be sold for every 1 ICE three-wheeler. We want to be the market leader in the three-wheeler market, not just in India but the world and the new OSM Mega factory with a capacity of 1 million units is the first step towards this goal.”

The Electric 3 wheeler segment is a very mature segment of the market in ASEAN region. In recent years this market has seen an exponential growth, mainly driven by e-commerce companies for their last mile requirements buoyed by the driving economics of EVs over diesel and CNG powered vehicles. After successful entry in India, Omega Seiki Mobility is planning to enter international markets. The company has already set up JVs in Bangladesh, Egypt and UAE.

“We are sitting at the cusp of a major EV revolution with our range of products which have not just been manufactured in India but also developed in the country keeping in consideration the harsh weather conditions. Today I am proud to say that OSM products are plying not just in urban and rural cities but also in small towns, be it in the harsh winters of the Himalayas or the sweltering heat of Rajasthan,” added Mr Narang.

“OSM is a global brand and the new OSM Mega factory will cater to the Indian as well as ASEAN, Africa and the Middle East markets. Today OSM is the first EV company to export Made in India  three-wheelers to these geographies. We will also set up manufacturing in these countries along with our local partners. OSM has also focused on integrating its product portfolio and is the only company in India to offer three powerpack options – long range, rapid charging and swappable.” said Dr. Deb Mukherji, Managing Director, Omega Seiki Mobility.

The Electric three-wheeler cargo segment is the backbone of the Indian last mile mobility ecosystem. These vehicles offer affordable transportation solutions to large parts of the country, which helps in betterment of the bottom-line of logistics players during a time when petrol, diesel, and CNG prices are at an all-time high.

OSM currently has an order book of over 50,000 units. The company is a leading last mile service provider with under its brand “UNOXpress”. The company is currently running its fleet in 20 cities, doing more than 10 lac Km per month. Omega Seiki Mobility is working closely with partners for overcoming the supply chain disruptions which have been plaguing the automotive industry. To achieve high scale production of EVs, the company has set up JVs with Korean company Jae Sung Tech to manufacture a new range of powertrains. Omega Seiki Mobility is also planning to manufacture in-house motors and battery packs.

“We can do 1 million vehicles only if we have our own motors, powertrains and batteries. We are working towards becoming a fully integrated company in India to have control over the supply chain dynamics of these critical parts fully under our control,” added Dr Mukherji.