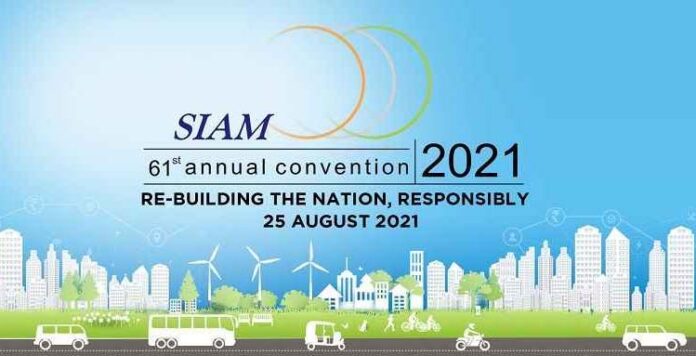 In the backdrop of a deep structural slowdown faced by the industry, the Society of Indian Automobile Manufacturers (SIAM) hosted its 61st Annual Convention, on a virtual platform, on August 25. Apart from a message from the Prime Minister, Mr Narendra Modi, the flagship industry event witnessed four power-packed sessions in which two senior ministers, three Government Secretaries, captains of the industry and several domain experts participated.

The deliberations kicked off with the PM’s message, which was read out by Mr Kenichi Ayukawa, President, SIAM and MD & CEO, Maruti Suzuki India.

Mr Ayukawa said the Prime Minister acknowledged the automobile Industry’s major role in manufacturing, exports, employment and ease-of-living for people. The PM, he said, “has motivated us to work together towards, new-age technology, world-class manufacturing, and next-generation infrastructure, to achieve, sustainable and productive growth, with quality and safety, and protect our environment, resources and raw materials.”

To bring back industry on growth trajectory, Mr Ayukawa said focused efforts are to be made. He said, “SIAM and ACMA have together worked out a localisation roadmap with a target of about 15-20 per cent further localisation in the next two to five years. He also thanked the Government for announcing the vehicle scrappage policy and the new PLI scheme.

Thereafter began the first plenary session with the theme: ‘Enablers for Sustainable Growth of Auto Industry in India’. Union Minister of Heavy Industries, Dr Mahendra Nath Pandey, was the Guest of Honour at the session.

Recognising the contribution of the automobile industry to the economy, Dr Pandey said the ministry was working consistently for the growth of automotive sector. He acknowledged that increased localisation supported by the PLI initiatives of the Government would make the industry more robust.

Speaking at the session, Mr TV Narendran, President, CII & MD, Tata Steel, said, “India can still become 5 trillion dollar economy by 2025-26 if it is provided with the right kind of policy support.” For Atmanirbhar Bharat to be successful, he said, it was important that the manufacturing sector is strong, and for that, the Indian auto sector plays a pivotal role.

In his special address, Mr Amitabh Kant, CEO, NITI Aayog, said, “The future direction for the industry is towards shared, connected and electric mobility. There are four prominent growth drivers that we should focus on. Firstly, we should expand investment in R&D. Then, we should focus more on innovation in small format mobility segment, establish massive charging infrastructure across the country and provide export impetus to the industry. EV is definitely integral in every OEM’s plans.”

Delivering a vote of thanks, Mr Vipin Sondhi, Vice-President, SIAM and MD, Ashok Leyland, said the Ministry of Heavy Industries has done a remarkable job in creating world-class testing and R&D infrastructure in all the auto hubs of the country. “Our mission is to take advantage of localisation, PLI scheme and EV charging infrastructure,” he said.

The second plenary session, themed ‘Outlook of Indian Auto Industry and Its Role in India’s Economic Growth’, saw the presence of Mr Tarun Bajaj, Revenue Secretary in the Ministry of Finance. It highlighted that the industry required a conducive environment and clear regulatory and policy support to script a faster recovery in the short term and stronger growth in the long term.

Sharing his vision, Mr Bajaj said that India’s auto industry’s contribution to GDP and GVA is immense and so is its contribution towards creating job opportunities for people. He urged SIAM to do a deeper study on the specific impact of taxation on affordability and recommend measures on how the Government could work with all stakeholders for the growth of this industry.

Sharing his views, Mr RC Bhargava, Chairman, Maruti Suzuki India, said, “The people in this country have great aspiration for vehicles. The industry has been witnessing comparatively slower growth in last 18 months. The Government and the industry need to take necessary action collectively to revive the sector.”

Mr Bhargava further said, “If we follow all the European standards then the vehicle cost may rise. Our focus should be on how to make the vehicles affordable to the masses. If the affordability factor is addressed, then the Indian auto industry can certainly recover in the short term.”

Mr Venu Srinivasan, Chairman, TVS Motor Company, said, “We are also facing a crisis of existence as the world witnessing severe climate change impact. Therefore, India needs to be on the cutting edge of zero carbon emissions. We have to go beyond electrification, move towards circular economy and look at the lifecycle and carbon emissions of future products.”

The third plenary session was graced by Mr Arun Goel, Secretary, Department of Heavy Industry and Mr Tarun Kapoor, Secretary in the Ministry of Petroleum & Natural Gas. The topic of the session was: ‘Crystal Ball Gazing – Future of Mobility in India’.

In his address, Mr Goel, said, “We are very optimistic about the Indian auto industry. All segments will grow in the coming times. The personal mobility segment will have the potential to grow by 30 pc and the freight segment will grow by 50 pc over the next decade.” The industry, however, will have to improve on two accounts – industrial skills and technical skills, he added.

Petroleum Secretary Mr Kapoor said in order to address economic and environmental challenges with regards to petroleum products, it is necessary to shift towards fuel options available in the country such as focusing upon blending of fuels.

In his opening remarks, Mr Vikram Kirloskar, Chairman, SIAM Passenger Vehicle CEOs Council & Vice Chairman, Toyota Kirloskar Motor, said the direction provided by the Prime minister in his Independence Day speech was visionary “as it provides a pathway of choosing a diverse energy mix that leverages our unique strengths and best exploits India’s potential.” He said to enable the auto industry to realise the national goals, it is necessary to have a consistent long-term policy roadmap that is based on socially relevant objectives such as energy security, import reduction, job creation and carbon mitigation etc.

Mr Shingo Konomoto, Chairman, President & CEO, Nomura Research Institute, Japan, said in India the future of mobility will be developed around the themes of clean, connected, safe and inclusive and it will be further driven by ‘connected’ as vehicles and infrastructure will communicate with each other.

In his lead presentation, Dr VK Saraswat, Member, NITI Aayog, elaborated on the emerging trends in mobility. He emphasised that electric vehicle is the way ahead for the country to address issues of climate change and crude import.

Mr Gurpratap Boparai, MD, Skoda Auto Volkswagen India, concluded the session with a note that all stakeholders should support the overall directions suggested by the Government.

Union Minister of Road Transport & Highways, Mr Nitin Gadkari, was the Chief Guest at the fourth and the last plenary session, titled ‘Technological Advancements in the World’. In his address, Mr Gadkari  emphasised on the need for adopting ethanol in a big way in the country and was open to look at hydrogen-based mobility in the future. He was also of the view that the industry and all stakeholders should look at establishing scrappage facilities across the country that would provide as a source of raw material for the industry itself.

Sharing the component industry’s perspective, Mr Deepak Jain, President, ACMA and CMD, Lumax Group, highlighted several factors that are creating truly a paradigm shift in the industry, which includes the adoption of alternative fuels such as ethanol and hydrogen; changes in drivetrain; more safety features in vehicles; usage of eco-friendly material in manufacturing and recycling; and the adoption of smart technology to boost manufacturing.

Dr Plinio Nastari, President, DATAGRO, Brazil, made a presentation on ethanol wherein he mentioned that ethanol is an integrated and modern solution for sustainable mobility.

Dr Daryl Wilson, Executive Director, Hydrogen Council, Canada, in his presentation, shared that hydrogen has become an important component in the mobility world with 500 billion worth of new projects announced in the last 24 months.

He agreed that sustained supply of ethanol will make it a formidable alternative fuel, by converting it into hydrogen form. “Ethanol would play a significant role in India as the country has a large farming community and a sustained supply will be able to supplement fossil fuel,” he concluded.