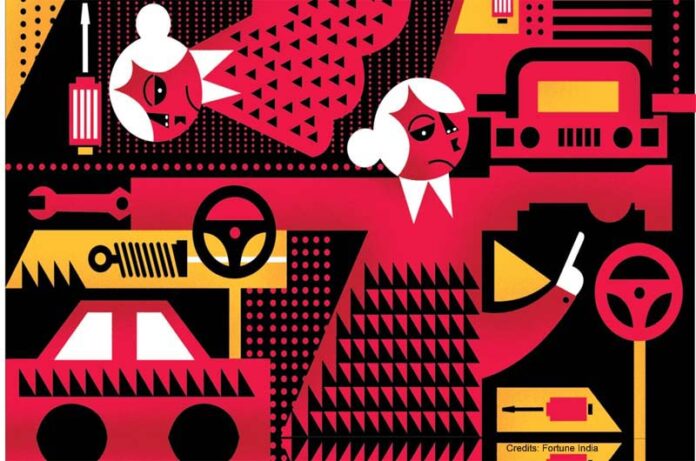 THE celebration of Intentional Women’s Day on March 8 ignited debate in many minds on the role of women in automobile industry. Though essentially it’s a man’s world, like the global auto industry, leading companies in India are sparing no efforts in ensuring inclusiveness by bringing about gender diversity in their workforce.

It’s no longer a rare sight to find women performing key functions in various domains across the automobile industry. Though their number is not too large, women today are entrusted with important roles and they are performing these with as much finesse as their male counterparts. No doubt, the top positions in most OEMs and component companies are still the sole preserve of men; but women are also rising steadily to higher managerial echelons.

A few high-profile women like Ms. Mallika Srinivasan, Chairperson and CEO of tractor maker TAFE; Ms. Harshbeena Zaveri, MD and President of NRB Bearings; Ms. Sulajja Firodia Motwani, CEO of Kinetic Green Energy & Power Solutions and Ms. Anjali Singh, Chairperson of ANAND Group, are the mascots of gender inclusiveness in the auto industry in India. Though all of them are from families that own a significant stake in the companies they head, their proficiency in handling the top jobs and their multifarious accomplishments are a source of inspiration for many women aspiring to join the automobile industry.

It’s no less refreshing to see women like Ms Sanghamitra Datta and Ms Ramkripa Ananthan who have managed to ride into the auto world successfully. While Ms Datta, a NID-graduate, runs her own automotive designing company called Stylus Automotive, Ms Ananthan, as the design head of Mahindra & Mahindra, was the person behind XUV500. There certainly are many more like them in the industry, though not necessarily in the media glare.

Apart from these exemplary women, there is a large women workforce employed in sales, marketing, HR, logistics, administration, and finance. The age-old mindset that certain machines are difficult for women to handle had always come in the way of more women being employed on the shop floor. But that too is changing now. With operations in the shop floor becoming more digital, companies are shedding their inhibitions in employing women to handle manufacturing jobs as well.

With changed mindsets, healthier working conditions, women-friendly policies and, most importantly, gender diversity as the goal, automobile companies and those in the allied sector are doing their utmost to attract more and more women to their workforce. Many have launched women-centric initiatives and also keep running campaigns from time to time with a focus on women empowerment.

Homegrown automaker Tata Motors has been steadily hiring more women from the campuses as the company had announced three year ago that it planned to have a quarter of its total workforce as women. In fact, its Pune plant was the first manufacturing plant in the country to have a female engineer on its assembly line way back in April 1974 when the late JRD Tata had personally hired Ms Sudha Murthy, wife of Infosys co-founder Mr NR Narayana Murthy.

Tata Motors has also launched a mission to “create a brigade of Women in Blue,” by enrolling, educating and skilling girls especially from economically deprived areas. Another initiative that the company has embarked upon is Women@Work that encompasses all facets including support systems, policies, infrastructure, cultural and mindset change apart from getting statutory clearances wherever required.

Not too far behind, Mahindra & Mahindra’s automotive division began with 23 in 2016 and the number of women across all its manufacturing plants has been on the increase ever since. The company claimed that the inclusion of women workforce contributed significantly to improving the culture at the shop floor.

With a drive named ‘Pink Collars’, Mahindra & Mahindra also started an initiative to promote recruitment of women in core productive roles at automobile workshops. The first batch of Pink Collars was kicked off in October 2018. The programme encourages channel partners to tie up with ITIs and impart up-to-date industrial knowledge through the company’s expert trainers, provide automotive aggregates to support practical training and make the ITI students industry-ready. Special recruitment drives are conducted for girl students at these ITIs by Mahindra’s authorised dealers to identify and recruit female talent.

MG Motor India came up with an initiative, called ‘Drive Her Back’, in 2019, which enables experienced and qualified women to resume their careers with dignity and pride. The returnee-ship programme engages women for one-year internship across marketing, communications, sales, after-sales, and product functions. The second edition of the programme was launched in October last year.

On March 5 this year, the company launched a mentorship programme called ‘Womentroship’. Under the programme, MG selected five social women entrepreneurs who have previously embarked upon creating prosperity for the underserved section of society, to uplift more women. The company will provide a platform for these women entrepreneurs to scale their social ventures to new heights and empower and create jobs for more women.

Hero  MotoCorp,  the world’s  largest manufacturer of motorcycles and scooters, has been relentlessly driving the agenda of diversity and inclusiveness through its initiative, ‘Project Tejaswani’. Aimed at creating equitable employment opportunities for women, the project has fostered equality and propagated a ‘holistic workplace’ within the organisation.

As part of the initiative, Hero MotoCorp has created dedicated career opportunities for women in every vertical and across the hierarchy – right from the shop floor level to senior leadership, thus promoting a balanced gender representation.

Additionally, the company has introduced various other initiatives such as ‘Women in Leadership Programme’, in collaboration with BML Munjal University and Imperial College of London to enable and equip women employees to take on leadership roles in the future.

Besides, Royal Enfield, the two-wheeler division of Eicher Motors, runs an entire engine assembly line with women workforce. Bajaj Auto, too, has ‘Women Only’ assembly lines at its Chakan and Pantnagar plants.

Recently, CEAT introduced the concept of only-women operated CEAT Shoppes across the country. On this Women’s Day, it launched a digital campaign, #UthaoSawalBadloKhayal that highlights need for change in the mindset of society on how it perceives women and their abilities

And as it happens every March, various auto and allied companies came up with hosts of initiatives to commemorate International Women’s Day this year as well. Leading tyre-maker Apollo Tyres recently felicitated eight women from across the country who have brought a positive impact in their community. In a virtual programme, talk-show host Richa Anirudh interacted and heard the encouraging stories of these eight Change Agents.

Electric two-wheeler manufacturer Okinawa Autotech announced a month-long campaign to honour women. It offered gifts to women on the purchase of its electric scooters.

Reputed auto companies like Lumax, Uno Minda, Pavna and Gold Seal have well-entrenched policies that promote empowerment of women. They have also launched multiple initiatives to achieve the goal of gender diversity at their workplaces.  (Details about their women-centric measures are being carried in separate articles alongside)

All these endeavours show that the automobile companies in the country are taking gender diversity with all seriousness, beyond the tokenism. One can only hope that there will be more success stories to share and more gender-inclusive initiatives to enlist on the occasion of International Women’s Day 2022.