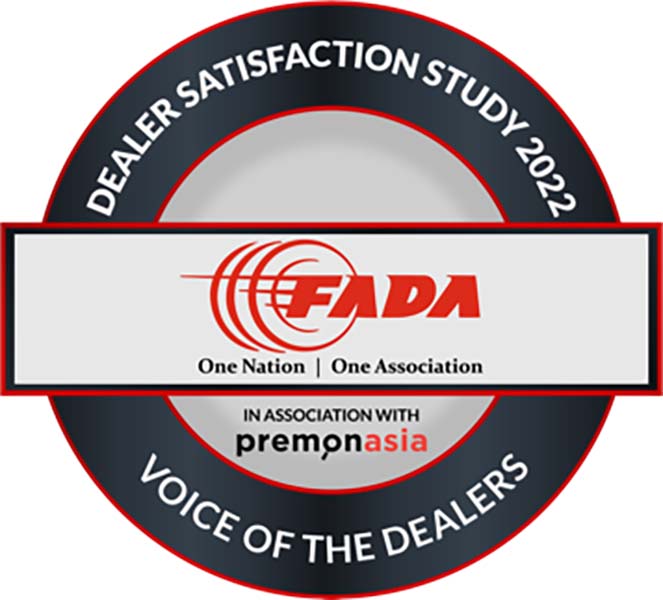 Auto dealers In India continue to expect higher transparency in dealer viability and policy issues from Original Equipment Manufacturers (OEMs). Despite improvement in relationships between the two across various segments, these issues still remain the two most critical concern for auto dealers across all segments of the industry.

The above findings were revealed in the outcome of the Dealer Satisfaction Study 2022 recently undertaken by Federation of Automobile Dealers Associations (FADA), the apex national body of automobile retail in the country in association with PremonAsia, a consumer-insight led consulting and advisory firm based out of Singapore.

Commenting on the outcome of the study, FADA President, Mr. Manish Raj Singhania, said, “FADA’s Dealer Satisfaction Study 2022 continues to examine the health of the relationship between auto dealers and their OEM’s post the covid era. The overall improvements seen across all value chains demonstrate the significance of conducting this annual study in identifying and addressing relevant issues that are critical to strengthen the partnership between the two stakeholders. While we welcome the efforts shown by OEMs in improving key issues related to sales, delivery and after-sales, dealers continue to expect higher transparency in matters related to dealership viability and a fair and balanced business policy.”

Mr C S Vigneshwar, FADA Vice President & Chairman DSS-22, said, “I am ecstatic to say that FADA’s DSS’22 continued to get more than 2,000 responses. This shows the trust which the dealers have on this study in terms of raising their concerns which can then be addressed by their OEMs in a logical manner.”

“While product reliability and durability coupled with efficient training programmes for sales and service teams remained the strengths cutting across all segments, involvement of dealer’s in OEM’s policy making and openness to direct inputs along with overall dealership viability remained the biggest areas to be worked upon”, Mr Vigneshwar added.

Mr Rajeev Lochan, PremonAsia Founder and CEO, said, “As post-COVID business normalization sets in, dealers are showing a shift in expectations with aspects related to sales and delivery and after-sales (particularly warranty issues) assuming greater importance than 2021. While the improvements made by OEMs in these factors is encouraging, the expectations on dealer’s business viability and the role of regional sales and service teams in representing dealer’s voice back to the head office will be vital in the foreseeable future.”

While their performance is commendable, some of the most improved OEM’s also deserve a mention. Hyundai Motors India improved its performance by 119 points to end at number 2 in the four-wheeler passenger mass segment. Royal Enfield jumped several notches to bag the third spot in the two-wheeler mass market segment, improving by 151 points over its last year’s performance. All the players in the CV segment have improved while Volvo Eicher Commercial Vehicles maintained its top slot by 163 points over its last year performance, the highest by an individual OEM across industry.

At the overall industry level, product is the highest scoring factor across all categories except for the four-wheeler luxury segment, where it comes a close second. This demonstrates the fact that the industry is expected to bring in world class products as per new age consumer demand.

At an Industry average dealer satisfaction score of 719, there is an improvement of 62 points from the last year study. All segments of the industry show an improvement over last year with the four-wheeler luxury segment improving by 147 points followed by the CV segment by 112 points.

In four-wheeler mass market segment, the study reveals that the sharing of training costs with the OEM’s is an area of concern along with the involvement of dealers in policy making. The dealers are happy with product reliability and the range to offer to the customers. In four-wheeler luxury segment, dealers have raised their concern with respect to parts delivery and turnaround time (TAT) as well as OEMs ability to meet the orders for vehicles as per specifications and requirements. The study also found that dealers were satisfied with the relevance of existing sales process, product range offered to customers and OEM’s extended warranty process.

In two-wheeler segment, OEMs buyback / deadstock policy and margins on sales is a concern area and needs to be attended to as it impacts dealer viability directly. Dealers are satisfied with the product reliability and range and the effectiveness of the training provided to the customer facing teams.

In the CV segment, dealers are concerned about ensuring viability and dealing with deadstock and inventory buyback by the OEM. Product dependability, reliability and range are areas of strength according to them. This is particularly important considering the shift to BS VI vehicles in the recent past.