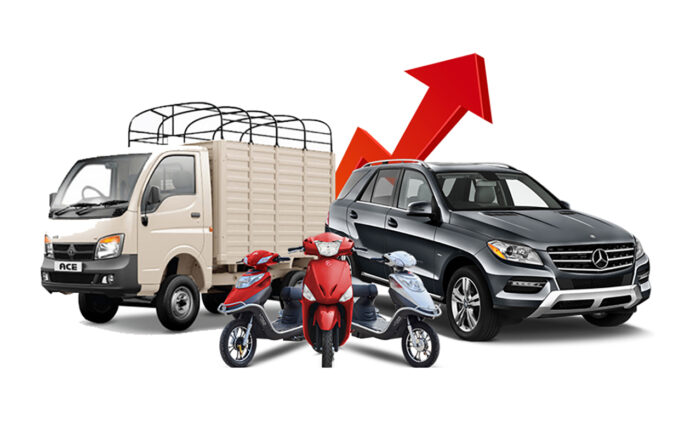 The first month of the financial year, April, has been disfigured by COVID challenges for the past two fiscal years. In 2020, automobile OEMs saw zero production and sales during the month due to the first COVID wave. In 2021, the year started on a good note, but the later part of April saw the second COVID wave playing havoc with the lives and businesses of the people across the country.

In the current financial year, this month continued to witness supply side constraints for the passenger vehicle makers, despite good demand. The two-wheeler segment, however, has shown signs of recovery with a double digit year-on-year growth, driven by uptick in motorcycle business. Three wheelers, commercial vehicles and tractor segments remain positive. The following is a segment-wise report of the vehicle dispatches to dealers during April 2022.

The company witnessed a year-on-year decline in domestic sales of all the categories, however sales in the utility vehicles (Ertiga, S-Cross, Vitara Brezza, XL6) stood at 33,941 units, marking a growth of 33%, as against 25,484 units sold in April 2021. “The shortage of electronic components had a minor impact on the production of vehicles, mainly domestic models,” said the carmaker in a statement.

Sales for Mahindra & Mahindra also grew, riding on the back of refreshed portfolio in the UV segment. Veejay Nakra, President, Automotive Division, Mahindra & Mahindra said, “Demand across our products continues to be robust with strong booking numbers and pipeline. There were a number of supply chain challenges due to lockdown in China. We continue monitoring the developments closely and will take corrective action as appropriate.”

Kia noted that Seltos remained its top contributor to overall sales with 7,506 units, while Sonet and Carnival contributed 5,404 and 355 units, respectively.

Yuichi Murata, Director- Marketing and Sales, Honda Cars India said, “The customer sentiment continues to show improvement and positivity, which is reflected in strong demand. However, the supply chain issues remain a challenge for the industry, which is impacting the ability to meet the growing demand.” The company is set to launch the hybrid version of its City sedan on May 4, 2022.

According to MG Motor India, “The production remained volatile and immensely impacted by the global supply chain constraints due to the sudden & new COVID-19 lockdowns in different parts of the world. The situation is expected to improve gradually within 6-8 weeks.”

Two wheelers: Analysts tracking the auto sector believe that improvement in rural income and wedding season have helped in the growth of two-wheeler segment sales.

The market leader in the two-wheeler segment, Hero MotoCorp reported a double-digit growth in sales for the month of April 2022, riding on the back of its motorcycle sales which grew to 3,92,627 units this year as against 3,39,329 units in the same period last year. Scooter sales for the company declined to 25,995 units in April 2022 when compared to 32,956 units in April 2021.

“With the economy gradually opening up and continued government policy support, April volumes indicate the continuously improving consumer sentiments,” said the company in a statement.

Honda Motorcycle & Scooter India (HMSI) noted that recovery for the April month leveraged support from market relaxations, favourable harvesting period and gradual opening of schools, colleges among other factors. Yadvinder Singh Guleria, Director – Sales and Marketing, HMSI said, “April marks the beginning of a positive period pillared by surge in market operations and the onset of marriage season. As per initial estimate, we anticipate a double-digit growth in Q1. However, moving forward, supply side issues and global economic scenario may continue to pose a challenge.”

According to TVS, the shortage in the supply of semiconductors has impacted the production and sales of premium two-wheelers. “Just as we had done last year, we are working aggressively with alternate sources and taking every effort to improve supplies at the earliest.” Its motorcycle sales grew by 4% to 139,027 units in April 2022, from 133,227 units in April 2021. Scooter sales of the company stood at 102,209 units in April 2022, marking a growth of 57%, as compared to 65,213 units in April last year. “The domestic two-wheeler sales include TVS iQube electric sales of 1,420 units in April 2022 as against 307 units sold in April 2021,” the two wheeler maker said. While the segment was in green, Bajaj Auto and Suzuki Motorcycles were the only OEMs to witness a decline in wholesales.

Three wheelers: The three-wheeler segment in India, one of the largest in the world, faced terrible decline in sales due to multiple factors. Owing to the pandemic, there was a sharp decline in the need for last-mile connectivity. This was coupled by contraction in financing for the segment which existed even before the pandemic. Also, there was a clear shift from ICE to electric three wheelers in the past year. However, with the opening up of schools, educational institutes and offices now, the sales of passenger-carrier three wheelers have risen gradually. The segment is growing on the low base of last year.

Tractors:  Hemant Sikka, President – Farm Equipment Sector, Mahindra & Mahindra said, “Our business witnessed strong growth with demand drivers staying on course. Rabi harvesting has progressed well across markets. Amidst the ongoing global situation and high exports of wheat from India, demand for Indian wheat crop has been very high and this has led to farmers getting higher prices in the open market for their produce than MSP.”

“Oilseeds are fetching higher market price in the domestic market. Both IMD and Skymet have forecasted a normal monsoon for this year, and this bodes very well for the upcoming Kharif season and will support continued growth for the tractor industry,” he said. In the exports market, the company sold 1,534 tractors, at a growth of 10% over last year.

Escorts said that with the ongoing harvesting in many states, better crop price realization as against the Minimum Support Price (MSP) due to current global geo-political environment, prediction of normal monsoon with likelihood of good rainfall in June and July leading to possible timely sowing this year, we expect next two months may witness strong retail sales. While we have taken a price increase in April 2022 but inflation pressure on the commodity prices continues and remains a key area of concern, it said.