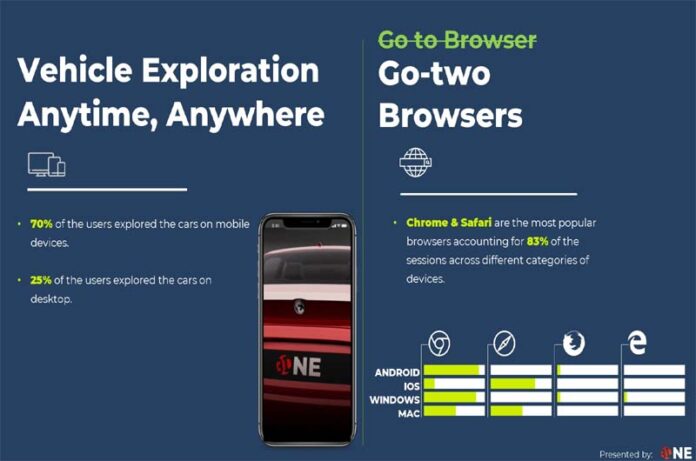 In what seems to be a clear indicator of changing consumer behaviour, as many as 7.6 million Indians chose to experience the features of their next car in 3D on the internet in 2020.

This is more than a 300 per cent growth in exploration than 2019, a trend analysis by Eccentric Engine, the firm behind leading data and vehicle visualisation platform ‘One 3D’, has revealed.

In a COVID-stuck year, with offline marketing and in-showroom promotion severely constrained, Eccentric Engine analysed and gathered insights from a sample of 100 million interactions deployed at select OEM online and offline touch-points and over 5,000 respondents across Tier-1,2 & 3 cities.

In the trend survey, while 51 pc of the sessions are from six top-tier cities—New Delhi, Mumbai, Pune, Hyderabad, Bengaluru and Chennai, a surprise player that broke into the top ten cities was Lucknow which had 3 per cent of the digital sessions.

The trend seems to be spreading to smaller Tier-2 & 3 cities, with the Tier-3 accounting for 9 pc of total sessions between 2018 and 2020. Cities like Secunderabad, Udaipur and Imphal led the uptrend in 2020.

As many as 91 pc of customers who purchased a car at a dealership after exploring it online (Online to Offline model – O2O) chose the same model at dealership as the one they had explored online. This holds invaluable marketing and product insights for the auto manufacturers.

“By intuitively integrating the real and digital world with One 3D we are excited to create  an unprecedented level of customer engagement for our OEM partners to understand evolving consumer needs and help them serve their customers better by offering world-class product visualization that can create surprise and delight and personalize their buying experience,” said Mr Varun Shah, Co-Founder Eccentric Engine.

The survey found that while in 70 pc of sessions, Indians explored their next car on mobiles, 25 pc did so on desktops. Most of the Indian users researched online between 12 pm- 4 pm, with Wednesday being the most preferred day. Perked up by the festive season, such exploration also saw a jump during the months of November-December.

Non-resident Indians are making buying decisions for their family by exploring Indian make cars digitally for families back home. In 2020, out of the total 4.6 pc NRI sessions, 31 pc of the sessions originated from North America which explored cars virtually on One 3D, followed by Middle East (32 pc), Europe (10 pc), U.K.(5 pc), Australia (4 pc), Africa (2 pc) and Latin America (1 pc).

The data also showed that Blue and White colours emerged the top shades of new cars explored by more than 40 pc Indian users and 35 pc preferred grey, brown and silver. Red, black and orange were preferred by 15 per cent.