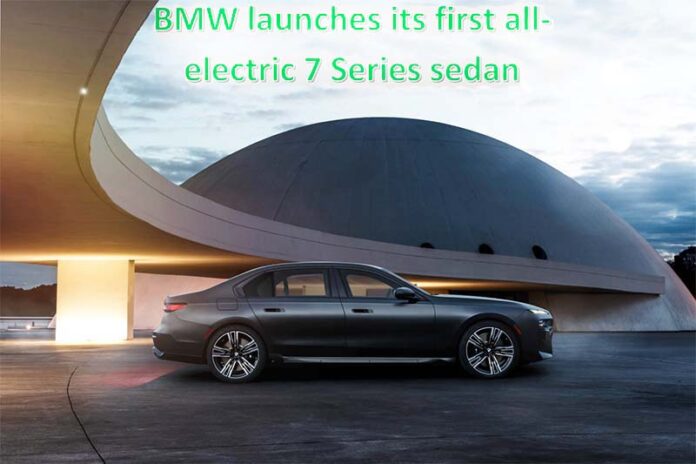 Luxury automobile manufacturer BMW has unveiled its latest all-electric 7 series luxury sedan, the i7 xDrive60. BMW called the new electric i7 a “fully integrated member of the 7 Series line” — from its luxurious-looking interior with a plethora of screens to its stylish exterior. Preorders for the vehicle opened on Wednesday and the U.S. launch is currently planned for Q4 2022, the company reported. Having an estimated range of up to 300 miles, the i7 will be BMW’s third all-electric vehicle, following the iX crossover and i4 midsize sedan.

The car has 536 horsepower and 549 lb-ft of torque that will get you from zero to 60 in 4.5 seconds. Speed is capped at 149 mph and the company promises a range of up to 300 miles. According to BMW, the all-electric luxury sedan is a fully integrated member of the model family. The new sedan demonstrates how an exclusive driving experience and onboard wellbeing can be combined with an unwavering commitment to sustainability.

According to the automaker, to extend the life of the batteries, the company tweaked the charging software to use a charging curve over the previous step settings it used in other models. “Following an initial, temperature-dependent phase of constant power supply, the new process now also controls charging based on a continuous nominal voltage curve that makes allowance for the variables of temperature, recharged capacity, and charge level at the start of charging,” the company explains.

The new BMW 7 Series incorporates a modern style that focuses on the essentials in its exterior and interior design. The front-end design for BMW vehicles in the luxury segment is dominated by features that are typical of the brand, but a clear distinction is maintained between these models and the others in the BMW range.