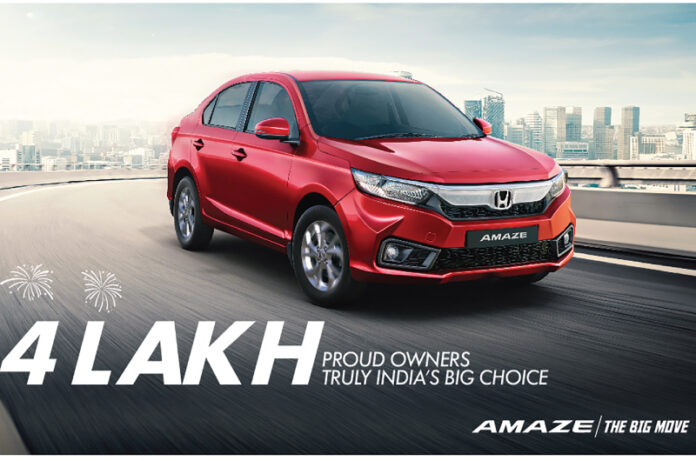 Honda Cars India announced on August 13 that its family sedan Amaze has cumulatively sold four lakh units since its introduction in the country in 2013.

The Amaze, now in its second-generation, is currently Honda’s largest selling model in the country and enjoys a strong market position in its segment, said a press release by the carmaker. The brand Amaze was conceptualised keeping in mind the ever-evolving needs and aspirations of Indian consumers, it added.

Speaking on the milestone, Mr. Rajesh Goel, Senior Vice-President & Director, Marketing & Sales, Honda Cars India Ltd, said, “Honda Amaze has been an extremely successful model for HCIL and is a key pillar of our business. The four-lakh cumulative milestone for Amaze has been possible because of the love of our customers and support of our dealer partners which has helped Amaze to become a popular brand across markets.”

Honda Amaze, said the company release, is a contemporary sedan which offers One Class Above Sedan experience with its bold design, sophisticated and spacious interiors, outstanding driving performance, advanced features, and safety technologies. It is powered by BSVI- compliant 1.5L i-DTEC diesel engine and 1.2L i-VTEC petrol engine available in manual and CVT versions for both fuel options.

The first generation Honda Amaze was launched in April 2013 and sold 2.6 Lakh units till March 2018. In its second generation, the sedan has so far sold 1.4 lakh units since its launch in May 2018.