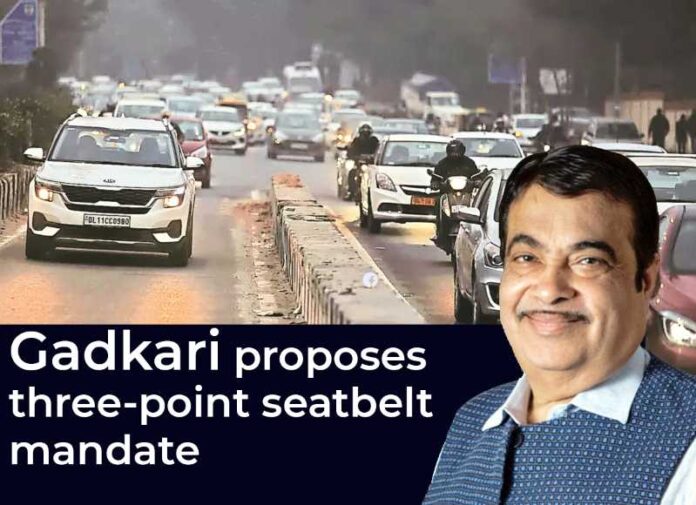 With India statistically having some of the most unsafe roads in the world, road safety and awareness are the need of the hour. In a bid to enhance both, the Ministry of Road Transport and Highways (MoRTH) plans to mandate certain active and passive safety features and introduce a new star-based safety rating system for new cars in the country.

The ministry is expected to roll out a draft notification soon, mandating three-point seat belts for all front-facing passengers in a car, including the middle seat in the rear row of a car. MoRTH chief Nitin Gadkari said at a press conference on Thursday, “I have signed a file yesterday to make it mandatory for automakers to provide three-point seat belts for all the front facing passengers in a car”.

However, the minister did not mention a date from when this new ruling will come into effect. Currently, most cars in the country have a three-point seatbelt only on the front seats and the rear side seats, with the centre rear seat getting a two-point seatbelt or a lap belt as seen on airplanes. Curiously, there was no mention of mandating a seatbelt reminder system for all passengers, which is a cheap and effective way of ensuring that passengers are always strapped in. Presently, seatbelt reminders are only mandated for the front two seats.

Apart from three-point seatbelts, Gadkari said that Electronic Stability Control (ESC), Auto Emergency Braking (AEB), Blind Spot Monitor, Lane Departure Warning and Driver Drowsiness Alert System are also some of the other safety features that will be implemented in the country. However, much like the three-point seatbelts, an exact date for the implementation of all these new safety features is yet to be revealed by the ministry.

While it’s commendable that the government is looking to shore up our road safety record with these mandated safety features, it is imperative that a timeframe is announced at the earliest in order to ensure that manufacturers have sufficient time to make the required changes to their models.

Earlier this year, the ministry also said that it will make six airbags mandatory in cars that can carry up to eight passengers. While additional airbags are effective, they are not cheap to install and engineer and would definitely drive up prices, especially for cars at the lower, price-sensitive end of the spectrum.

In order to adhere to the new proposed six airbags mandate, manufacturers would have to account for not only the cost of the airbags, but also the cost of completely re-engineering the car with thicker pillars and broader sections to accommodate them. This would lead to cars at the budget-end of the market becoming more expensive, potentially even forcing certain customers to opt for a two-wheeler instead, which is far less safe than any type of car.

In fact, Geneva-based International Roads Federation (IRF) have even called for Gadkari to reconsider the implementation of six airbags by calling it a “pro-rich and anti-poor policy”. “We need to have awareness, enforcement and good compliance, on seat belts fastening first and only then come up with the mandate for providing airbags in all rear seats”, said K K Kapila, president emeritus, International Road Federation (IRF), in his letter to the transport minister.

“Just by virtue of not having an enclosed passenger compartment, a two-wheeler is much more unsafe as compared to a car. By making the minimum specifications of cars much more stringent, the prices of entry level vehicles go up, we make it increasingly difficult for these susceptible two-wheeler owners to upgrade from a two-wheeler to a four-wheeler. A few rich people might be targeted to get safer, but many more even from upper middle class will be denied a safe mobility option”, he added.

During the press conference, Gadkari also announced that a star-based safety rating system will be implemented for vehicles in India. Said to be in line with Global NCAP and Euro NCAP, the new rating system is likely to be called ‘Bharat NCAP’ or the Bharat New Vehicle Safety Assessment Programme (BNVSAP). The new system is said to give equal focus to the safety of passengers, pedestrians and other road users. In a similar vein, MoRTH officials had announced back in 2016 that India would get its own car assessment programme.  However, not much more information was given regarding this safety rating system and when it will be implemented in the country. Gadkari further mentioned that the ministry is also working on introducing other safety features as per global standards, like including a noise in electric vehicles to warn other road users of their presence.