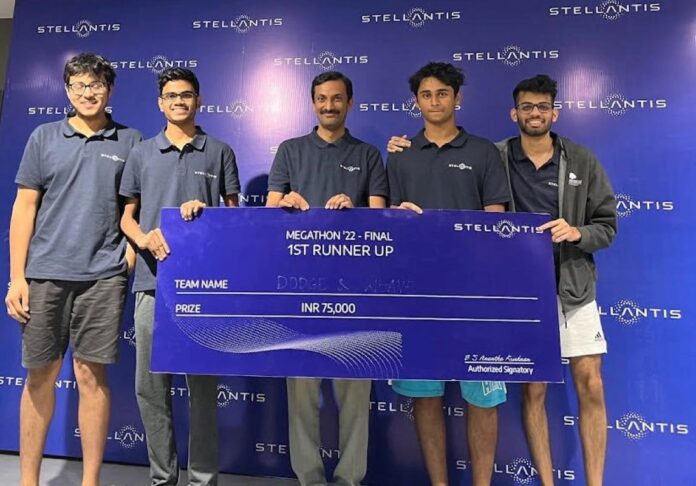 The India Software division of Stellantis, in collaboration with the ECell department of IIIT Hyderabad, hosted a 24-hour long-run hackathon on October 29th and 30th, 2022, providing students with a platform to put their problem-solving skills to use for the automobile industry. The event was highly successful in garnering the most entrepreneurial and technology-driven youth from across the region. Rahul Rajupalepu, Head, Stellantis Digital Hub, was the chief guest at round one of the Hackathon, while Anantha Krishnan, Head and Vice President, Smart Cockpit, Stellantis, was the chief guest of the 24-hour hackathon for the final round. The Megathon ’22 is the largest student-run 24-hour Code Hackathon organized by the ECell of IIIT Hyderabad.

Rahul Rajupalepu, Head, Stellantis Digital Hub, said, “Mobility has turned into one of the world’s fastest expanding sectors. The adoption of cutting-edge mobility-related technology has been the main driver of this increase. Indeed, the potential in the mobility sector is vast. We received an overwhelming response of 710 participants for round one, out of the 400 students who participated in Stellantis’ two problems. This enthusiasm prompted us to extend the hackathon to a second round, which was solely organised by Stellantis with the help of E Cell IIIT Hyderabad.”

Addressing the event, Anantha Krishnan, Head and Vice President, Smart Cockpit, Stellantis, said, “The mobility industry worldwide is constantly evolving, and there is a growing need for new-age solutions to the problems that afflict the ecosystem. We truly believe that young creative minds play a vital role in not only addressing the industry’s problems but also bolstering its march toward the future. It is based on this belief that Stellantis decided to associate with the renowned IIIT Hyderabad Megathon. The participation of 710 students, i.e., 180 teams from all over India, and the immense talent we got to see at the event was thrilling.”

The second round of the hackathon took place offline at IIIT Hyderabad on October 29 and 30, 2022. In the second round, the top 12 teams were chosen, and 11 of those 12 teams competed in the final round, which comprised 46 participants. Shortlisted teams got an opportunity to work on a live solution on Stellantis’ vehicles. Out of 11 teams, the top 4 teams were announced as winners: Team Alpha Q Romeo, Team Dodge and Weave, Team Jesus Chrysler, and Team Citroen Lemons. Anantha Krishnan, Head and Vice President, Smart Cockpit, Stellantis, presented the winners with a cash prize of INR 5.5 lakhs for the cumulative results of both rounds.

The event concluded with a prize distribution ceremony, which was followed by a photo session with all the winners and those who helped make the spectacular event a reality.