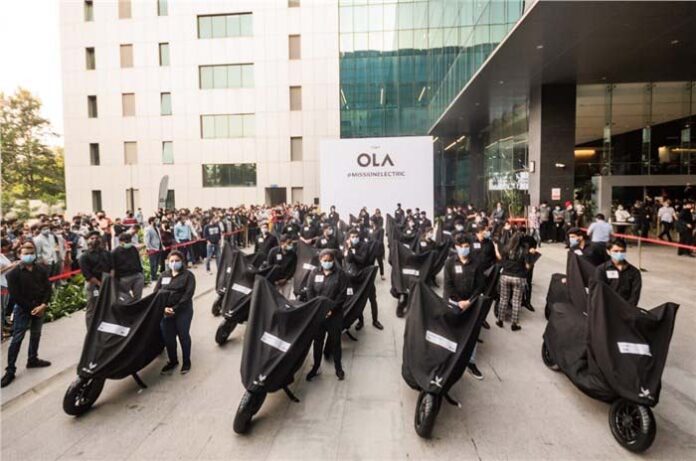 Ola Electric said on 15th December that it has delivered the first 100 Ola S1 scooters to customers in Bengaluru and Chennai. The company organised a special event at Ola’s headquarters in Bengaluru to mark the commencement of deliveries. Founder Bhavish Aggarwal was also present.

While there were around 40 customers present at the venue, some customers said that some of the promised features — the mobile app, hill hold, cruise control, voice commands and Bluetooth — were yet to be enabled. Customers were told that it would take another month for many of the features to be enabled through over-the-air software updates.

Varun Dubey, Chief Marketing Officer of Ola Electric, said that the company had already announced that certain features could only be enabled through over the air updates. Ola Electric has been under pressure from customers for delay in delivery of scooters, which the company promised would begin in October.

The company is building the two-wheelers in what it claims is the world’s biggest scooter factory in Tamil Nadu, which will eventually be able to produce 10 million scooters a year. In October, Ola Electric said it had raised $200 million led by Falcon Edge and Softbank at a valuation of $3 billion.

Ola Electric is taking an unconventional approach by delivering scooters directly to customers’ doorsteps, as against the brick-and-mortar model practised by traditional automotive companies. The company had last month rolled out test rides to customers across India.

Volvo Cars and Luminar, the autonomous vehicle sensor and software company, announced its launch plans of the next generation all-electric SUV in 2022. According...
Read more
Awards & Milestones

Maruti Suzuki India Limited continues to be the most preferred car brand in the country. In 2021, 8 out of top 10 best-selling passenger...
Read more
Uncategorized

Registration fee goes up from April 1

The registration fee of new vehicles, including two, four-wheelers and autorickshaw, is set to increase by INR 300, INR 600 and INR 600, respectively...
Read more
Awards & Milestones

German luxury maker Audi snapped a three-year losing streak in India and made a turnaround with a 100% growth in sales in 2021 where...
Read more
- Advertisment -