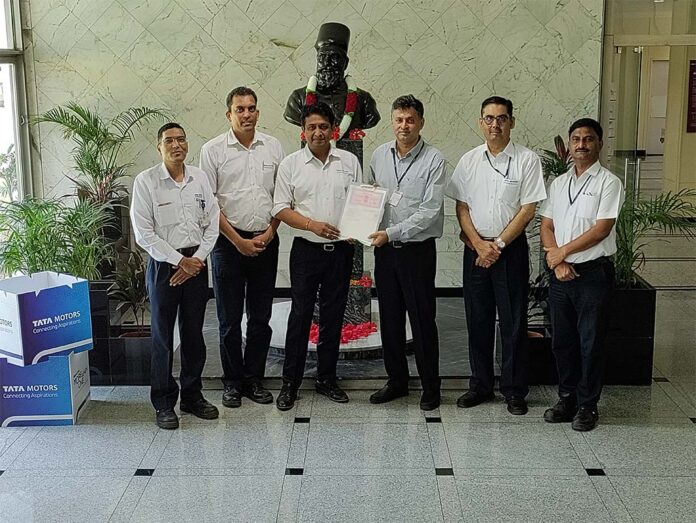 Tata Motors and Tata Power have entered into a Power Purchase Agreement (PPA) to develop a 4 MWp on-site solar project at Tata Motors’ Pune commercial vehicle manufacturing facility. A significant step towards building a resilient and sustainable future, the installation is collectively expected to generate 5.8 million units of electricity, potentially mitigating over 10 lakh tonnes of carbon emission. This is equivalent to planting over 16 lakh teak trees over a lifetime.

Mr. Alok Kumar Singh, Plant Head, Commercial Vehicle Manufacturing Facility, Plant, Tata Motors, “It has been our continuous endeavour to reduce greenhouse gas emissions to achieve Net Zero Emission goal. We have been exploring different avenues and business models for using renewable energy to promote sustainable business growth. In FY22, the total renewable energy contribution at our CV Pune plant was 32%. With this agreement, we reaffirm our commitment to moving closer to our goals of cultivating 100% renewable energy capacity.”

Until FY22, Tata Motors at its Pune plant, including its passenger and commercial manufacturing facility, deployed 15 MWp solar project, generating 21 million kWh of renewable electricity. Over the next few years, the company plans to expand the solar capacity of its Pune plant to meet the growing demand for renewable energy.

Mr. Shivram Bikkina, Chief – Solar Rooftop ,Tata Power, said, “Tata Power is pleased to collaborate with Tata Motors in supporting the expansion of green energy utilisation through this 4 MWp power project at its manufacturing facility in Pune. We are committed to working closely with all our partners and creating clean energy solutions for making their operations green and sustainable.”

Tata Motors, as a signatory to the RE100, is committed to using 100 percent renewable energy in its operations and has taken many steps toward this objective by gradually increasing the proportion of renewable energy used in its operations. In FY22, across all its plants in India, the company generated 92.39 million kWh of renewable electricity for its manufacturing operations, which is 19.4% of the total power consumption leading to avoidance of 72,992 metric tons of carbon dioxide equivalent and financial saving of Rs. 27.37 crores.

Tata Power comes with a proven credentials and background in executing multiple large solar rooftop solutions including one of the world’s largest rooftop (16MW) at a single location at Radhasoami Satsang Beas (RSSB), Amritsar; 2.67MW at Cochin International Airport; one of the world’s largest solar-powered cricket stadium-Cricket Club of India (CCI) with 820.8 kWp capacity in Mumbai; unique installation of the solar vertical farm (120kW) at Dell Technologies at Bangalore and 1.4MW floating solar at Tata Chemicals, Nellore. In addition, Tata Power is carrying out an extensive pan-India residential rooftop program to make people aware of the benefits of savings through solar energy.