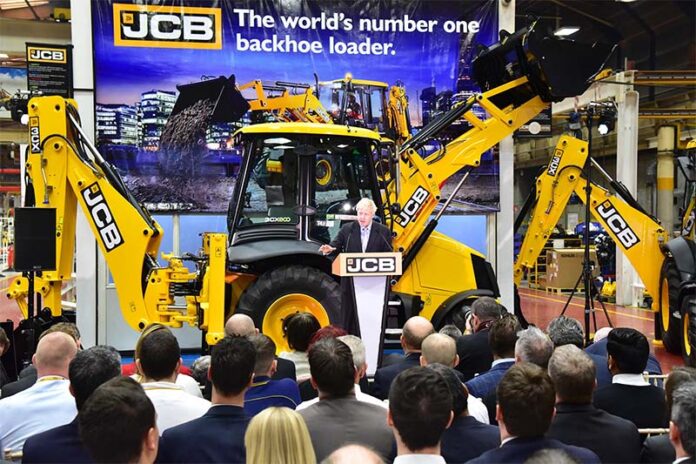 UK based construction equipment major JCB is investing INR 1000 crore in setting up a dedicated exports facility for critical parts and components for the global operations in Vadodara, Gujarat. The 6th facility was inaugurated by the Gujarat Chief Minister Bhupendra Patel and UK PM Boris Johnson on Thursday, April 21, in presence of the chairman of JCB, Lord Bamford.

With the starting of Gujarat factory, JCB will consolidate all its exports under one roof and will use the private port in Hazira, Surat to ship welded component and fabrication parts around the world to JCB’s global supply chain. Lord Bamford, chairman, JCB said, the factory in Vadodara is a real example of Make in India for the world. “When we talk about exports from India, what is sold in India or shipped to North America, UK or Europe, it is one global quality, they are all identical. In fact, the quality in most parts made in India is better than in any other parts of the world.”

Spread over 47 acres, the production at the factory will hit capacity by October of 2022. The plant will have a processing capacity of 85000 tons of steel. Initially planned to be set up with an investment of INR 650 crore, the capex at the plant has been scaled up to INR 1000 crore. Impressed by the fast pace of infrastructure development in the country, Bamford added, “Your country is developing rapidly, it is getting better every year. Tell me one country in the world, which is developing 30 kms of highway every day, that presents a tremendous opportunity to grow in the future.”

The machines made out of Vadodara will be shipped to plants in the UK, Brazil and other parts of the world. The company stated that 50% of the workforce at the factory will be women. This could significantly improve JCB’s exports, which presently stand at 15% of total sales volumes to about 20-25% in the mid-term. JCB already exports to 110 countries from India.

India, which is the largest market for JCB since 2007, accounts for almost a fifth of JCB’s global turnover. The company posted a revenue of Rs 11751 crore in FY-21 as per financials secured from the Ministry of Corporate Affairs shared by business information platform Tofler. Prior to inauguration of the Vadodara plant, the Rocester, England-based company operated five manufacturing facilities through JCB India.